Deceased, thrown over rail by Oddjob

Kisch is a fictional enforcer to Auric Goldfinger and a major antagonist in EON Productions' 1964 James Bond film Goldfinger. Portrayed by the late German actor Michael Mellinger, Kisch was created specially for the film.

He is the one who shoots James Bond with a tranquilizer gun after Goldfinger lets Bond live while in Switzerland.

After, into Goldfinger's office, Kisch warns his boss that the gangsters are all here.

Kisch is also the one in charge of gassing the members of the mafia after their meeting with Golfinger.

After, when Goldfinger discuss with Bond, Kisch warns Goldfinger that two men (Felix Leiter and Johnny) are in a car with binoculars.

As Operation Grand Slam commences, Kisch, disguised as a US Air Force staff sergeant, leads Goldfinger’s faux US Army convoy of vehicles to Fort Knox. Goldfinger’s men dynamite the electrified gate and Kisch detonates the explosives, clearing a path for the convoy. Once outside the bank, the henchman operates the industrial laser hidden inside the Army ambulance, and then orders the men to reverse to the security doors. When Goldfinger’s men open the gold vault door, the atomic bomb arrives at the bank via helicopter, Kisch handcuffs 007 to the bomb so that Bond can left behind to die with the explosion. Kisch becomes trapped inside the bank’s gold vault with Bond and Oddjob after he handcuffs Bond to the atomic device. The vault is sealed shut by Goldfinger once the American soldiers begin to make headway back into Fort Knox. Not loyal enough to Goldfinger to die for Operation Grand Slam, Kisch states that he can save them by disarming the bomb, but is stopped by Oddjob who subsequently kills him by throwing him off the top floor guard-rail. Bond is able to retrieve the key to unlock his handcuffs in Kisch’s jacket pocket moments before Oddjob makes his way to the floor where Bond is located. 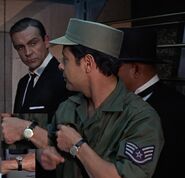 Add a photo to this gallery
Retrieved from "https://jamesbond.fandom.com/wiki/Kisch?oldid=92966"
Community content is available under CC-BY-SA unless otherwise noted.