Kissy Suzuki is a fictional character in Ian Fleming's 1964 James Bond novel, You Only Live Twice, portrayed by actress Mie Hama in the 1967 feature film adaptation. Similar to the novel, Suzuki is an Ama diver, however, the rest of the character's own personal narrative differs greatly between the book and film.

When the movie got dubbed in Japanese, Suzuki was voiced by Sanae Kobayashi in the DVD/Blu-Ray version.

Kissy Suzuki is introduced when James Bond must go undercover, acting as a local fisherman, while investigating the mysterious happenings surrounding a small island in Japan. As an agent, she is chosen by her employer, Tiger Tanaka, to aide Bond on the mission due to her keen sense of adventure and skills as an Ama diver. Bond and Kissy marry in a staged wedding ceremony allowing Bond access to continue his investigation further, moving around the islands of Japan as an unnoticeable local rather than an obvious visitor.

During a meal at Kissy's house, she makes clear to Bond that, although the pair are married, their work together "is business". That evening, Kissy informs Bond and Tanaka of word going around the local village that an Ama girl mysteriously died in a cave on the mainland that served as a vent for a nearby Volcano. The pair agree to set sail for the cave in the morning to investigate.

The following morning, Bond and Kissy leave Matsu Island and head over to the cave. When in the cave, the pair instantly realize something is wrong. Bond tells Kissy the cave is filled with poisonous gas to which the pair flee the boat and swim out of the cave underwater, not rising until they reach fresh air. Swimming on to land, Bond and Kissy continue to search the perimeter for clues. While walking, the pair take a moment to relax where the pair finally share an intimate moment, cut short by a passing helicopter that seems to fly into the mouth of a volcano which Kissy tells Bond hasn't been active in her life time. Investigating further, they realize the roof of the volcano is in fact a metal door leading inside SPECTRE's base.

While Bond breaks into the base, Kissy heads back to rendezvous with Tanaka. As she swims, she is targeted by a shooting SPECTRE helicopter. Kissy's skills as an Ama diver are put to use allowing her to hide and protect herself under water. After making it back to land and informing Tanaka, Kissy heads back to the base with Tanaka and his ninja's to help Bond. Breaking into the base, Kissy spots Tanaka is in danger with an opponent and is quick to shoot the SPECTRE worker, saving Tanaka's life. Assisting in the battle, Kissy and Bond manage to find one another. When Ernst Stavro Blofeld sets off explosions that destroys the entire base, Bond and Kissy lead the way out the cave via swimming and successfully escape.

Finding a raft out at sea, Bond and Kissy relax as they watch Blofeld's base explode in the same style as a volcanic eruption. Just as they decide to enjoy their 'honeymoon', the pair are rescued by M's submarine. 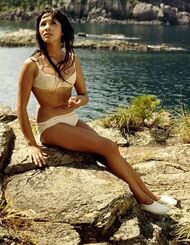 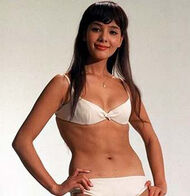 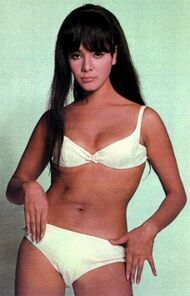