Deceased, shot and fell to his death

From Russia with Love (video game)
Krilencu is a fictional Bulgarian assassin who works for SMERSH in order to eliminating western agents of Turkey. A henchman to Rosa Klebb, he is a supporting antagonist of the 1963 James Bond film From Russia with Love. Portrayed by the late Hungarian-born British actor and stuntman Fred Haggerty, Krilencu was based on the character of the same name from Ian Fleming's 1957 novel From Russia with Love. He would later be re-imagined for Electronic Arts' 2005 video game adaptation of the film.

Krilencu works for SMERSH and is in charge of eliminating western agents of Turkey. He and the Russians mistakenly believing that Ali Kerim Bey is responsible for the murder of several Soviet agents in the country, in fact the crimes have been committed by the villainous organization SPECTRE[1]. Krilencu attempts to kill Bey first by placing a mine on the outside wall of Kerim's headquarters. It explodes just as Kerim is away from his desk for a few minutes. In a second attempt, Krilencu and his men attack the gypsy camp where Kerim and Bond are visiting.

Later, two of Kerim's sons disguise themselves as policemen to scare Krilencu out of his hideout. As he comes out of the secret entrance, Kerim shoots him using Bond's portable sniper rifle. 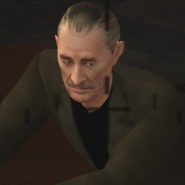 Krilencu in the Video game adaptation

Retrieved from "https://jamesbond.fandom.com/wiki/Krilencu_(Fred_Haggerty)?oldid=99082"
Community content is available under CC-BY-SA unless otherwise noted.