La Signorina del Mateo was present with Mademoiselle Deladier on the pheasant hunt in the manor of Hugo Drax. They were introduced to Bond. Next she was seen on the secret base near the River Tapirapé and after Drax's Space Station. She was one of Drax's "perfect women" who are tasked with repopulating the human race. She possibly died when the space station was exploded. 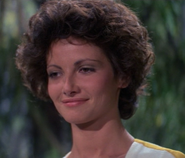 Add a photo to this gallery
Retrieved from "https://jamesbond.fandom.com/wiki/La_Signorina_del_Mateo?oldid=87297"
Community content is available under CC-BY-SA unless otherwise noted.