Laser emitter. Additional features vary by depiction, can include:

James Bond: World of Espionage
The laser wristwatch is a modified wristwatch equipped with a miniature laser cutter developed by the British Secret Intelligence Service's (SIS/MI6) research and development division, Q-Branch. The device was usually featured in the form of a modified Omega Seamaster wristwatch produced by Omega, although several other variants have also appeared inside and outside the official series.

The 1995 film GoldenEye proved to be the official introduction for both laser-equipped and Omega-branded wristwatches. That year, Pierce Brosnan took over the role of James Bond and wore the Omega Seamaster 300M Quartz Professional (model 2541.80.00) as a result of the producers' desire to update the image of the fictional "super-spy" to a more distinctly sophisticated "Euro" look.[3] Largely the work of Lindy Hemming, in charge of costume/wardrobe for the new movies, she thought the Seamaster looked the part of a rogue special operative who also need the ability to dress up. She recognized the history of Omega Seamasters in the Royal Military (importantly SBS like Bond and SAS) which furthered her decision. Hence the choice of the Seamaster Diver by Prince William.

Projected from a small red emitter on the bezel of the wristwatch in the 12 o’clock position, a focused laser beam is directed at a material, which then either melts, burns, or vaporizes away. The watch is shown to be capable of cutting through the steel-plate floor of a train carriage rigged to explode by villain Alec Trevelyan. In addition to its laser functionality the device also acts as a wireless remote detonator for limpet mines, which can be disarmed by pressing a trigger disguised as the watch's helium escape valve. The red emitter light on the bezel blinks red when armed. Similar models of wristwatch with detonator functionality are shown to have been in use with MI6 prior to the events of GoldenEye, as Trevelyan is familiar with the device's workings.[4]

In all later films, Brosnan wore an almost identical Omega Seamaster Professional 300M Chronometer (model 2531.80.00).[3] While gadget-equipped wristwatches would appear in many subsequent films, it was not until 2002's Die Another Day that Bond would be equipped with a laser-cutter watch.

From the time at which he is taken hostage by the North Koreans, until his M reinstates him after stripping him of his licence to kill, 007 is without his iconic blue-dialled, blue-bezelled Omega Seamaster. He is provided with a new watch during a workshop scene with the new Q, who states that this watch is Bond's 20th: a reference to the fact that Die Another Day was the 20th James Bond film. Continuing the many references to previous Bond films, the laser watch is used to cut through the ice outside Gustav Graves' Ice Palace, providing Bond with underwater access to the villain's facility.

Introduced as the "Q Watch v2.01 Beta", the wristwatch serves as GoldenEye 007's in-mission menu interface. Accessed by pressing start, Bond will lower his left gun (if present) and raise his left arm to look at his watch. The menu is divided into five pages. The current page is indicated by one of the five bars at the bottom of screen being highlighted. The watch also shows Bond's current health and armor. The orange bar on the left is his health, the blue bar on the right is his armor. Another interesting feature of the watch is that it actually keeps time - each mission has a starting time set in its intro block, and the watch will count up from that until the mission is completed.

The watch's laser functionality is only used in the 'Train' mission, where it is intended to be used to cut through a portion of the floor. It can actually be used like a normal weapon; it is very strong but has a short range. In addition, the watch features a strong magnet similar to the Rolex Submariner from the 1973 film Live and Let Die. The magnet can pull weapons, ammo, keys, and other objects flagged as collectable to Bond. It appears prominently in the second 'Bunker' level, helping Bond attain a key vital to his escape. The magnet function reappears in the 'Archives' level, with the possible use of pulling both the PP7 and its ammunition off of a table. However, it is almost always overlooked in favor of simply picking up the PP7 and its ammo quickly.[1] The outlook of watch is loosely based on the Omega Seamaster Professional Diver 300M - the wristwatch Bond uses in the film version of GoldenEye.

The World Is Not Enough (video game)

Released by Electronic Arts in 2000 to tie-in with the 1999 film of the same name, The World Is Not Enough wristwatch expanded on the features of its film counterpart by adding a high-powered laser beam that can cut open locks. However, the laser cutter function only appears in the Nintendo 64 version. The wristwatch appears to be based on the Omega Seamaster Professional Diver 300M with altered dial and the absence of the logo to avoid copyright infringement. It bears the outlook of a chronograph in spite of the case suggesting otherwise. Although, the case, the bezel and the chain bracelet are accurate when it comes to the actual wristwatch seen in the film, albeit with a green dial as opposed to blue.

After its absence in Agent Under Fire, the laser wristwatch returns in Nightfire, operating similarly as in The World Is Not Enough on Nintendo 64. In the early demo versions of the PC game, the wristwatch was directly based on the Omega Seamaster Professional Diver 300M with a makeover similar to that of the one seen in the film version of The World Is Not Enough when Bond activates an inner-case glowing light likely powered by a battery, a function which the real life model of the wristwatch does not have. Despite the texture of the dial containing the word "chronograph" engraved on it, the wristwatch functions with a Quartz movement. Additionally, the helium valve is missing.

However, in the final release version of the PC game, the watch is dramatically changed into a generic chronograph diver likely due to licensing issues, still carrying the Omega Seamaster Professional Diver 300M case, albeit with an altered luminous dial estranged from the aforementioned brand. It also displays the time of the respective computer's own clock.[5] The console version counterpart also bears a similar design, yet the lume glowing from within via the hour markers and the hands is similar to that of the version seen in the PC demo.

One of several unusual additions to the original plot of From Russia with Love, a generic wristwatch with a miniature laser emitter was included in EA's 2005 video game adaption. When activated, the watch features a red laser capable of penetrating bulletproof glass and is powerful enough to destroy door locks and damage enemies. However, its limited charge generally makes it impractical as a combat tool. Q can upgrade the watch so that the laser can last longer and burn stronger.[6] As with previous iterations, the device quickly recharges when not in use. While the watch itself doesn't exploit its appearance, it is actually based on the Rolex Submariner worn by Bond in the film counterpart as evidence suggests on the gadget's icon and textures.

Shortly after Electronic Arts abandoned the license, in May 2006, the rights to develop and publish James Bond games passed to Activision. In keeping with the more serious tone of the Casino Royale reboot, many Activision 007 games eschewed the more fantastical elements of previous Bond adventures in favor of more realistic Q Branch equipment. After a seven year absence from the franchise, the laser wristwatch reappeared in the 2012 anniversary game and Skyfall tie-in 007 Legends. As with Skyfall, the Omega Seamaster Planet Ocean (model 232.30.42.21.01.001) was chosen as 007's wristwatch for Legends. While not a laser-cutting device like previous incarnations, the Legends watch was equipped with an electro-magnetic pulse (EMP) emitter (located above the 12 o’clock position on the bezel) which could create distractions by frying small electrical devices in each level (such as radios, speakers, walkie-talkies and other portable electronics).

Additional functionality included a motion-tracking feature. When the watch gadget is selected by the player, the glass on the watch face is masked by a digital "sonar"-like heart beat monitor, which shows nearby enemies as red dots based on proximity to Bond. The radar also shows the location of nearby devices which can be affected by electro-magnetic pulses, indicated by blue dots on the watch face. The watch is also used for safe-cracking, wirelessly linking with a small electronic cracking device affixed to the safe door. When connected to the safe, the glass on the watch face changes to show several dials which must be rotated so that they align to reveal a pattern and unlock the safe. Bond does this by rotating the bezel on the watch clockwise/anti-clockwise with the pattern and difficulty of the crack altering depending on the type of safe.[2] 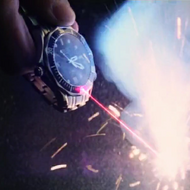 Bond uses his wristwatch's laser to escape from the train, as seen in GoldenEye (1995). 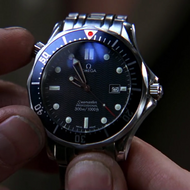 Close-up of the Omega Seamaster Professional Chronometer, as seen in GoldenEye (1995). 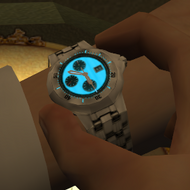 Generic laser wristwatch, as seen in the PC variant of Nightfire (2002). 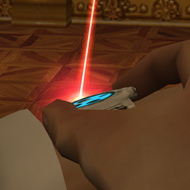 Using the laser wristwatch, as seen in the PC variant of Nightfire (2002). 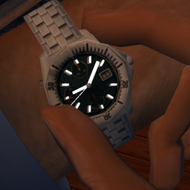 Generic laser wristwatch, as seen in the GameCube variant of Nightfire (2002).

Using the safe-cracking feature of Bond's wristwatch, as seen in 007 Legends (2012).

Using the motion-tracking feature of Bond's wristwatch, as seen in 007 Legends (2012).