Le Chiffre, also known as Herr Ziffer, was a fictional Soviet intelligence operative. The primary antagonist of the 1954 Climax! episode, Casino Royale, the character was portrayed by Austro-Hungarian-American actor Peter Lorre, and was the first on-screen adaption of the literary character who first appeared in Ian Fleming's 1953 novel of the same name.

Known only as "The Cipher" (in various languages), Le Chiffre mentions that he acquired the nickname from his experiences as a displaced person after the Second World War; being just a number on a passport. His other moniker, Herr Ziffer, suggests he is originally from a German-speaking area, possibly either Germany or the former Austro-Hungarian empire. His displacement would suggest he could have been a refugee from the Nazi regime, either because of his political leanings or a possible Jewish background, or a combination of the two; alternatively he may be one of those ethnic Germans who were expelled from much of Eastern Europe after the war ended, but the fact he works with the KGB would tend to contradict that. His involvement with the KGB and Communism proves he is not a refugee from Soviet occupation.

Le Chiffre is in charge of the local French Communist Party, and has become the chief Soviet intelligence agent operating in the region and controlled through Leningrad Section II in Paris. The British agent Clarence Leiter describes Le Chiffre as the most dangerous man they've ever had; a fanatic, ruthless, incorruptible and everything he does is entirely legal. But his weakness is gambling with Soviet funds - losing 80,000,000 francs; something which has come to the attention of his Soviet handlers and a problem which the British, French and Americans intend to take advantage of.

American agent "Card Sense Jimmy Bond" is dispatched to Casino Royale in a bid to bankrupt Le Chiffre in a game of Baccarat, preventing him from recouping the 80 million by gambling with his remaining 26 million francs. He is always accompanied by three armed guards and carries a firearm, along with three razor blades concealed in his cigarette case, hat band and in the sole of his left shoe.

Aware of his opponents' plans, Le Chiffre has one of his men make an attempt on Bond's life outside the Casino and later has Bond's former love interest, Valerie Mathis, visit him in his suite to dissuade the spy from playing against him at the Baccarat table. He has Bond's suite bugged with a microphone and monitors the conversation. She apparently fails to convince him and Bond proceeds to play the following day, despite failed attempts by Le Chiffre to procure Bond's funds and threats on Valerie's life. The game initially goes in Le Chiffre's favor and Bond is cleaned out. However, Mathis secretly provides a further 35,000,000 francs, enabling him to continue the game and defeat Le Chiffre - winning 87,000,000 francs. He leaves the table while one of his guards holds Bond at gunpoint with a gun disguised as a walking cane. After overcoming his opponent, Bond hides his winnings. Le Chiffre corners him in his hotel room, bringing Valerie with him; revealing that she is in fact an agent of the French Secret Service, the Deuxième Bureau. He binds Bond's wrists and feet with rope and tortures the spy with a pair of pliers in order to discover the location of the cheque. In a desperate bid to stop the torture, Valerie discloses that she saw Bond with a screwdriver as she arrived - leading the men to leave them in the bathroom as they search the suite. Le Chiffre accidentally leaves his cigarette case and razor, which the pair use to cut their bonds as Le Chiffre finds the money.

They overcome their captors and as Mathis tries to extract the cheque from Le Chiffre's pocket, he pulls out one of his razor blades and holds her hostage. She slips from his grasp as he opens the hotel door and Bond shoots him dead.

As Clarence Leiter points out, Le Chiffre is an extremely dangerous man in his own right and a probable sadist. He lacks pity and he has absolutely no complaints about inflicting savage violence against those who cross him. This ruthlessness had got him noticed by the KGB and SMERSH, who also found him to be efficient in carrying out their orders, and so they promoted him to a position of great responsibility with access to large sums of money.

However, Le Chiffre had the weakness of complete overconfidence which would ultimately lead to his downfall - his habit of gambling his client's money in order to bolster the riches that he would gain as a result of his success backfired violently when he started losing that money in large quantities and his enemies decided to compromise him with it. 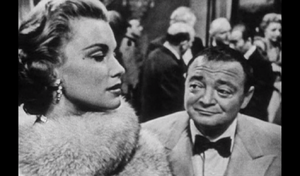 Although he is involved in a relationship with Valerie Mathis, he displays little affection towards her.

This incarnation of Le Chiffre has something in common with his counterpart played by Orson Welles in the 1967 film, i.e. they are both played by highly respected veteran actors, in this case Peter Lorre and in the next Orson Welles.

As this is a 1950s television adaptation some of the sleazier aspects of the character have been removed, e.g. his involvement in the sex trade. The literary character had invested much of his money in a series of brothels. 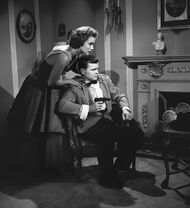 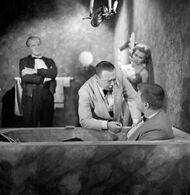