Marshal of the Soviet Union

General Secretary of the Communist Party of the Soviet Union

Leonid Ilyich Brezhnev (Russian: Леони́д Ильи́ч Бре́жнев) was a Soviet politician, who led the Soviet Union from 1964 as the General Secretary of the Central Committee of the Communist Party of the Soviet Union (CPSU). Based on the real-life politician, the character briefly appeared in the 1983 James Bond film, Octopussy, and was portrayed by British actor, Paul Hardwick.

Leonid Brezhnev oversees a meeting of the Red Army military commissariat. During the convocation, Soviet General Orlov tries to rattle other members for a more aggressive policy, claiming his troops in East Germany could invade Western Europe in five days. The moderate fraction under General Gogol opposes this plan due to their fear of nuclear retaliation. With tensions escalating, Brezhnev restores order by stating "World Socialism will be achieved peaceably. Our military role is strictly defensive." As a deflated Orlov reluctantly takes his seat, Brezhnev encourages Gogol to continue with his briefing. He is not seen again.

Despite being credited as "Soviet Chairman", director John Glen confirmed that the character was intended to represent Leonid Brezhnev[1], who had died on 10 November 1982, a year before the film's release.[2] Paul Hardwick was offered the role after appearing as Brezhnev on the 1980 British television documentary Invasion, which depicted the events surrounding the Soviet Union's invasion of fellow Communist nation Czechoslovakia.[3][1] Glen noted that the actor's close likeness gave the scene a "good feeling of authenticity".[1] 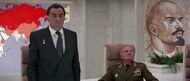 Retrieved from "https://jamesbond.fandom.com/wiki/Leonid_Brezhnev?oldid=93713"
Community content is available under CC-BY-SA unless otherwise noted.