The Leyland Sherpa 240 is a van built by British manufacturer Leyland. Originally called 'Leyland Van' in 1974, it was re-named to 'Sherpa' in 1975. In 1978, the van received different engines.

During the 1980s, the Leyland Sherpa was sold under the newly-formed Freight Rover brand, and after the demise of British Leyland, the LDV Convoy and LDV Pilot shared many technical aspects with the original Sherpa.

While disguised as an Egyptian telephone service worker, Jaws uses a grey Leyland Sherpa 240 in Kairo. James Bond and Anya Amasova both manage to climb into the rear compartment, but - unknown to them - Jaws has installed a listening device there.

Jaws drives to an ancient temple on the banks of the river Nile, where a short fight ensues. Bond and Anya manage to get away using the Sherpa (driven by Anya), but the van is heavily damaged during the fight with Jaws. Soon, the heat gasket breaks down, so both Bond and Anya have to abandon the van in the desert. 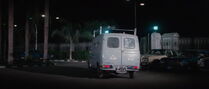 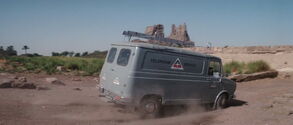 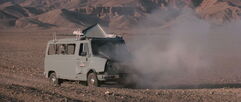 The Sherpa breaks down in the desert.
Add a photo to this gallery

Retrieved from "https://jamesbond.fandom.com/wiki/Leyland_Sherpa_240?oldid=82212"
Community content is available under CC-BY-SA unless otherwise noted.