Live and Let Die is the second James Bond novel by Ian Fleming, first published in 1954. It was adapted into the eighth official film in the EON Productions Bond franchise and the first to star Roger Moore as British Secret Service agent, Commander James Bond. The film was released in 1973 and was produced by Albert R. Broccoli and Harry Saltzman.

After the events of the previous novel, James Bond tells M that he would like to get his vengeance on SMERSH, the organization that was responsible for Vesper Lynd's suicide and the "Ш" cut into his left hand. His chance comes when Mr. Big, another member of SMERSH, has been discovered laundering 17th century gold coins. Bond travels to Harlem, New York where Mr. Big operates.

Bond then meets with his two associates for the case, Captain Dexter and Felix Leiter (who had worked with Bond in the previous novel). After they rendezvous, a bomb explodes in the place where Bond was staying. Bond, undaunted, went with Felix Leiter in search of Mr. Big. Unbeknownst to them, Big's network of informers (controlled by a man named "Whisper") have a lead on them, and when Leiter and Bond head to a strip club owned by Mr. Big, they are subsequently captured.

There, Bond meets the beautiful Solitaire, who is asked to find out if Bond's bogus reasons of being in Harlem were true. To Bond's advantage, she lies, and he is released with a broken finger and manages to kill Tee-Hee Johnson, one of Big's henchmen, by kicking him down a flight of stairs. Leiter is also released by a member who shares his love of jazz.

Leiter and Bond then travel to St. Petersburg, Florida to track the treasure's origin. Solitaire happens to join to Bond in order to escape from Mr. Big. However, they are found out and Solitaire is captured by Mr. Big's operation. While snooping in a dockside warehouse owned by Mr. Big, Leiter falls into a shark tank and is severely mauled, but survives. Bond later investigates the warehouse and nearly falls into the same trap, but overpowers his assailant who falls into the trap and dies. Bond discovers that Mr. Big is smuggling the coins into the U.S. under sand in aquariums holding dangerous fish.

Bond flys to Jamaica to put an end to Mr. Big's operation. Working with John Strangways and Quarrel, Bond discovers the island that Mr. Big has been using to excavate the treasure. Locals fear the island due to voodoo chanting and drumming they often hear coming from the island, which is always followed by dead bodies being discovered the next day. Bond scuba dives to the island and is nearly attacked by barracudas when the drumming begins. He manages to escape into a cave after planting a mine on the bottom of Big's yacht.

In the cave Bond is caught by Big's henchmen and is bound to Solitaire. He realizes that Mr. Big was using a recording of voodoo drums to both frighten the locals as well as attract sharks and barracudas. The two are then tied to a rope and dragged by Big's boat. Big planned that a nearby coral patch would shred their bodies, attracting sharks. Bond's mine detonates before the boat reaches the coral and the two manage to survive. A bloody Mr. Big crawls along the coral toward Bond but is eaten by barracudas and sharks.

Live and Let Die is considered one of Fleming's most controversial novels due to its depiction of blacks. In 2002 for the first time in the United States since the book was published, the original title of chapter five ("N***er Heaven") is used.

Elements from this novel appeared in three Bond films. Besides the 1973 film of the same name, the 1981 film For Your Eyes Only and 1989's Licence to Kill also used major plot elements from the book.

Fleming's original novel was adapted as a daily James Bond comic strips which was published in the British Daily Express newspaper and syndicated around the world. The adaptation ran from December 15, 1958 to March 28, 1959. The adaptation was written by Henry Gammidge and illustrated by John McLusky. The strip was reprinted by Titan Books in the early 1990s and again by Titan in 2005. 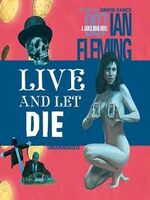 British Paperback (2012)
Add a photo to this gallery
Retrieved from "https://jamesbond.fandom.com/wiki/Live_and_Let_Die_(novel)?oldid=98192"
Community content is available under CC-BY-SA unless otherwise noted.