The Lotus Esprit S1 (or Series 1) is a sports car that was built by Lotus in the United Kingdom between 1976 and 1978. The S1 was launched in October 1975 at the Paris Auto Show, and went into production in June 1976, replacing the Europa in the Lotus model lineup. The car gained fame through its appearance in the 1977 film, The Spy Who Loved Me, where it was featured in a long chase sequence on the Italian island of Sardinia; ultimately converting into a submarine. Appearing in the film's tie-in novelisation and video game, the Esprit also featured in Storm Bringer (1985), 007 Racing (2000) and the Best of Bond DLC for Forza Horizon 4 (2018).

With a steel backbone chassis and a fiberglass body, the Esprit was powered by the Lotus 907 4-cylinder engine, as previously used in the Jensen Healey. This engine displaced 2.0 L, produced 160 bhp (119 kW; 162 PS) in European trim (140 bhp (104 kW; 142 PS) in US/Federal trim), and was mounted longitudinally behind the passengers, as in its predecessor. The transaxle gearbox was a 5-speed manual unit, previously used in the Citroën SM and Maserati Merak; it featured inboard rear brakes, as was racing practice at the time. The Series 1 embodied Lotus’ performance through light weight mantra, weighing less than 1,000 kg (2,205 lb).

The S1 Esprit can be distinguished from later Esprits by a shovel-style front air dam, Fiat X1/9 tail lights, lack of body-side ducting, and Wolfrace alloy wheels. Inside the car, the most obvious indication of an S1 Esprit is a one-piece instrument cluster with green-faced Veglia gauges.

The Lotus Esprit S1 featured in The Spy Who Loved Me (1977) was fondly referred to by production staff as 'Wet Nellie' - a tribute to Bond's autogyro, 'Little Nellie' from You Only Live Twice. As well as being amphibious, the highly armed car has cannons that spray cement on to pursuing vehicles. It also has wheel arches that turn into fins, a small periscope on the roof enabling 007 to navigate at speed underwater and its other weaponry includes a missile launched from its rear deck, mines, sprayed black dye, and torpedoes shot from the front grille.

Lotus delivered two street-legal vehicles to the production, one of which was converted to a camera car. Initially, the designated stunt driver for the chase sequence involving the Esprit was unable to achieve the level of excitement the production team desired owing to the Esprit's significant levels of grip, and they quickly became frustrated with the lack of progress. Following an unsuccessful take, the crew asked for the car to be returned to their location, and with the stunt driver absent Lotus engineer Roger Becker, who had accompanied the Esprits to the set and was familiar with the car's handling characteristics, climbed behind the wheel. His brief performance in the car was so impressive that when he slid to a halt in front of the cameras, producer Cubby Broccoli allegedly instructed him to repeat the feat immediately, and he would ensure the cameras were rolling this time. Becker was subsequently hired to do virtually all of the stunt driving for the chase sequence.

Additionally to the two road cars, Lotus also provided six Esprit bodyshells, one of which was sealed for underwater scenes.

Main article: Differences to the film

The film's novelization, written by screenwriter, Christopher Wood, also features the Lotus Esprit S1, which Bond identifies as the "QST/A117 Submersible"[1], mentioning that it is unofficially referred to as "Wet Nellie" behind Q's back. In the novel the submersible is equipped with a periscope CCTV system, which rises from its housing where the bonnet joins the windscreen.[1] Its defensive equipment included an ink sprayer and a protective louvred metal screen, which rose up to cover the windscreen like a Venetian blind. The recessed barrels of two 2.3-inch rocket launchers were concealed behind two small hatches beside the front indicator lights.[1] Unlike its cinematic counterpart, the vehicle was not equipped with surface-to-air missiles or mines. During the car chase sequence, Bond attempts to destroy his pursuers with an unidentified rear-facing weapon; but it malfunctions, leaving Anya to shoot at it with her pistol.[1]

The Lotus Esprit appeared in the children's' storybook, Storm Bringer, published in North America in 1985 by PlayValue Books. Despite retaining the "PPW306R" registry number, the vehicle now had a bright red coat of paint; perhaps conflating the original vehicle with the copper-colored Lotus Turbo Esprit from For Your Eyes Only (1981). After a series of mysterious kidnappings, all accompanied by strange weather, James Bond is called upon to end the reign of terror by the Storm Bringer. During the story, Bond is pulled from the car by a tornado generated by the villain.[2] 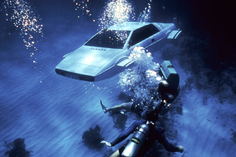 Shooting the scale model on location. 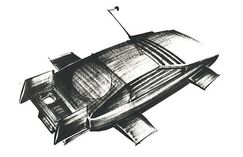 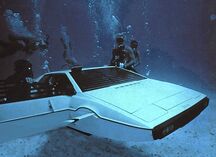 Operating the model Lotus on location. 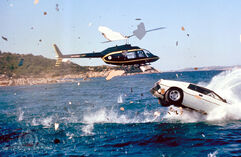 The Lotus Esprit submersible, as seen in the film. 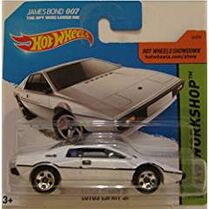 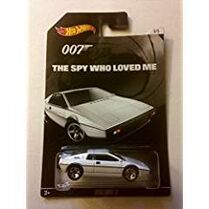 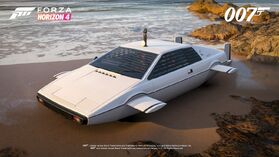 The Lotus in Forza Horizon 4.

Retrieved from "https://jamesbond.fandom.com/wiki/Lotus_Esprit_S1_(1976)?oldid=92843"
Community content is available under CC-BY-SA unless otherwise noted.