"You're crossing over to a place where there is no mercy!"
― Lucia to Bond[src]

Lucia Sciarra is the wife of SPECTRE agent Marco Sciarra. The character appeared in the 2015 James Bond film, Spectre and was portrayed by Italian actress, Monica Bellucci.

Instructed by his former superior M, James Bond is assigned to trace notorious assassin Marco Sciarra, kill him, and attend his funeral, knowing his womanizing ways will get him the answers he needs there rather from than the assassin himself. Bond travels to Mexico and successfully kills Sciarra, failing his plan of targeting a stadium for a terrorist attack.

Three days later in Rome, Sciarra's wife, Lucia attends his funeral, unaware that both Bond and her husbands employer Ernst Stavro Blofeld are also in attendance. When alone, Bond approaches Lucia, at first offering his condolences, but then questioning her grieving. When her two bodyguards, Marco and Francesco arrive, Lucia leaves Bond at the church.

Returning home that night, Lucia is nearly executed by her two bodyguards, who are also working for Oberhauser, however Bond arrives to kill them both saving her; rather than being thankful, Lucia mercifully tells Bond he's wasting his time as more men will come to kill her.

Inside the house, Lucia attacks Bond when he reveals it was he who killed her husband. Tensions rise as Lucia brands herself a 'dead woman' due to Bond's actions. When up against a mirror, Bond and Lucia both realize that unless they work together they could both end up dead. It is now that Lucia tells Bond that she knows of the organization, due to her husband's involvement and possibly being a member herself, and that due to his death, a rare meeting is being held at the Palazzo Cardenza to decide his replacement.

After spending the night together, a couple of hours before the meeting's to take place, Bond tells Lucia she will be safe and that his CIA friend, Felix Leiter will meet her and take her to a safe location away from harm. Lucia gives Bond a final warning, telling him to leave with her. Bond's final words are: "buona fortuna, donna Lucia", Italian which translates too, "good fortune, Lady Lucia". 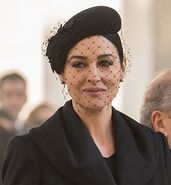