Whip marks on back

Lupe Lamora is the fictional girlfriend of Latin American drug lord Franz Sanchez. The character serves as a secondary Bond girl in the 1989 James Bond film Licence to Kill and was portrayed by Talisa Soto. The character also appears in John Gardner's accompanying novelization.

Lupe Lamora is first seen in the pre-title sequence. Franz Sanchez flies to Florida, where he catches her in bed with another man. Sanchez orders the Alvarez's heart cut out, and he personally whips Lupe with a manta ray tail for her infidelity. Sanchez and Lamora leave and attempt to escape, drawing the attention of the DEA, who call upon Felix Leiter and James Bond to help apprehend Sanchez.

Later, she is shown to be living in the Wavekrest, without Sanchez. Milton Krest uses this opportunity to harass her, much to her chagrin. At night, Bond approaches her with a knife, demanding to know the whereabouts of Sanchez. She protests that she does not know as he never told her. Bond sees his friend, Sharkey, dead outside, and leaves Lupe behind to take revenge on the henchmen who killed him.

Bond next encounters Lupe in the Isthmus Casino. Again, he asks to be taken to Sanchez, and this time she obliges.

She turns up, along with Sanchez, at his hotel, while Bond poses as a guest/potential member of Sanchez's cartel. She expresses her concern and love for James in front of a jealous Pam Bouvier and Q. Later she helps Bond surreptitiously escape, in return for helping her escape from Sanchez as well.

Finally, Bond encounters her again at the party at the end of the movie, after he has defeated Sanchez. She thanks him again for his help, and they kiss. This catches the attention of Bouvier, who sadly walks down to the pool alone. Bond, faced with a decision between two girls, ultimately chooses Bouvier over Lupe, instead setting her up with the President of Isthmus City.

Lupe is notable in that while she shares a close affiliation with the film's main villain, Sanchez, she is an ally to Bond. 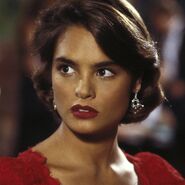