"If you carry a double-O number, it means you're licensed to kill, not get killed."
― M[src]

Sir Miles Messervy (known by his first initial, "M") is a fictional character in Ian Fleming's James Bond series; the character is the Head of Secret Intelligence Service—also known as MI6.

M was played by Bernard Lee from the first Bond film Dr. No, until Moonraker. As in the novels, it is hinted that M's real name is Vice Admiral Sir Miles Messervy. While his name was hinted at throughout the novel series and finally revealed in The Man with the Golden Gun, in the film series only his first name, Miles, was revealed (in The Spy Who Loved Me). Like his novel counterpart, he also has the rank of Vice Admiral and it is generally assumed that the M of the films and of Fleming's books are one and the same person. Lee portrayed M in all of the six Sean Connery films as well as George Lazenby's film and in the first four Roger Moore films. He is succeeded by Robert Brown in 1983's Octopussy.

In Dr. No, M refers to his record in reducing the number of operative casualties since taking the job, implying someone else held the job recently before him. The film also saw M refer to himself as head of MI7; Lee had originally said MI6, but was overdubbed with the name MI7 prior to the film's release. Earlier in the film, the department had been referred to as MI6 by a radio operator.[1]

On many occasions, M demonstrates his high opinion of Bond despite his occasionally problematic methods and flippant nature. When informed that Bond had witnessed the dead body of François Derval despite other witnesses seeing him boarding a plane after that time, M stated that 007's word was enough to make him consider that avenue of investigation worth exploring. On a later occasion, when adversary Hugo Drax was able to conceal the existence of a laboratory that Bond was attempting to show M and another official, while the other man requested that Bond be taken off the case, M quickly accepted Bond's word when Bond gave him a phial he had retrieved from the now-vanished lab for testing by Q.

A number of Bond scholars have noted the Lee's interpretation of the character was in line with the original literary representation; Cork and Stutz observed that Lee was "very close to Fleming's version of the character",[2] whilst Rubin commented on the serious, efficient, no-nonsense authority figure.[3] Smith and Lavington, meanwhile, remarked that Lee was "the very incarnation of Fleming's crusty admiral."[4]

Lee died of cancer in January 1981, four months into the filming of For Your Eyes Only and before any of his scenes could be filmed.[5] Out of respect, no new actor was hired to assume the role and, instead, the script was re-written so that the character is said to be on leave, with his lines given to either his Chief of Staff Bill Tanner or the Minister of Defence, Sir Fredrick Gray.[6] Later films referred to Lee's tenure as head of the service, with a painting of him as M in MI6's Scottish headquarters during the 1999 installment The World Is Not Enough.[7] 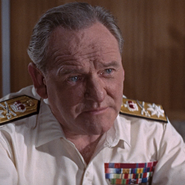 "This is not a personal vendetta 007. It's an assignment like any other"

Retrieved from "https://jamesbond.fandom.com/wiki/M_(Bernard_Lee)?oldid=103145"
Community content is available under CC-BY-SA unless otherwise noted.