Forever and a Day

Sir Miles Messervy, known professionally as M is a fictional character in Ian Fleming's James Bond series; the character is the Head of Secret Intelligence Service—also known as MI6.

Fleming based the character M on a number of people he knew who commanded sections of British intelligence. Primary amongst these was Rear Admiral John Godfrey, who was Fleming's superior at the Naval Intelligence Division. M has appeared in the novels by Fleming and seven continuation authors.

Fleming's third Bond novel, Moonraker, establishes M's initials as "M**** M*******" and his first name is subsequently revealed to be Miles. In the final novel of the series, The Man with the Golden Gun, M's full identity is revealed as Admiral Sir Miles Messervy KCMG; Messervy had been appointed to head of MI6 after his predecessor had been assassinated at his desk. He turned down the post of fourth Sea Lord to become head of MI6.

A naval theme runs throughout Fleming's description of M and his surroundings, and his character was described by journalist and Bond scholar Ben Macintyre as "every inch the naval martinet". Macintyre also notes that in his study of Fleming's work, Kingsley Amis outlined that way Fleming had described M's voice, being: angry (three times); brutal, cold (seven times); curt, dry (five times); gruff (seven times); stern, testy (five times). In addition, M collects navy cutlasses and lives in his home surrounded by nautical ornaments and mementos.

Over the course of twelve novels and two collections of short stories, Fleming provided a number of details relating to M's background and character. In On Her Majesty's Secret Service it is revealed that M's pay as head of the Secret Service is £6,500 a year, (£101,396 in 2012 pounds) £1,500 of which comes from retired naval pay. Although his pay is good for the 1950s and 1960s, it is never explained how M received or can afford his membership at Blades, an upscale private club for gentlemen he frequents in London to gamble and dine. Blades has a restricted membership of only 200 gentlemen and all must be able to show £100,000 (£1,559,944 in 2012 pounds) in cash or gilt-edged securities. Kingsley Amis noted in his study, The James Bond Dossier, that on M's salary his membership of the club would have been puzzling. As a personal favour to M, the staff at Blades keeps a supply of cheap red wine from Algeria on hand but does not include it on the wine list. M refers to it as "Infuriator" and tends only drinks it in moderate quantities unless he is in a very bad mood.

Academic Paul Stock argues that M's office is a metonym for England and a stable point from which Bond departs on a mission, whilst he sees M as being an iconic representative of England and Englishness.

In the first post-Fleming book, Colonel Sun, M is kidnapped from Quarterdeck, his home, and Bond goes to great lengths to rescue him. The later continuation books, written by John Gardner, retain Sir Miles Messervy as M, who protects Bond from the new, less aggressive climate in the Secret Service, saying that at some point Britain will need "a blunt instrument". In Gardner's final novel, COLD, M is kidnapped and rescued by Bond and finishes the book by retiring from MI6. Continuation Bond author Raymond Benson's 1998 novel The Facts of Death continued Messervy's retirement, where he still resides in Quarterdeck. The book also introduces a new M, Barbara Mawdsley. In the book Devil May Care, M took up Yoga to deal with the stress of changing times.

After the end of World War II in 1945, M was one of the original proponents for the 00 program, which faced mild backlash from the likes of Sir Charles Massinger, secretary to the Minister of Defence, who scoffed at the idea of a "tantamount licence to kill", in much the same way as people had been averse to Churchill's "bureau of ungentlemanly warfare" during the War, but all the same, many of the war spies found jobs in the Vauxhall building.[2] M started the 00 branch with only three agents, 007, 008, and 0011 in order to confuse enemies and prevent the formation of a sequence, but by 1950 he was considering expanding the program to include more agents.[3][4]

In 1950, 007 was found dead in Mersailles, France and M met with Bill Tanner, his chief of staff to discuss replacing him with an operative named James Bond. In order to test Bond's skill, they sent him to assassinate a Swedish traitor named Rolf Larsen, and after the mission proved successful, he summoned Bond into his office for the first time to send him out on another assignment to track down 007's killer. However, he first took a moment to express frustration at Bond's having woken Larsen up to confirm his identity before killing him. M took Bond's action as an affront to his authority and research, but quickly changed the subject and briefed the man on his assignment before discussing giving him the 009 number before he asked to take 007 instead.

An aging M, after noticing Bond's gravelly voice, suggested Bond's cigarette habit was catching up with him and informed him that after he began smoking a pipe in University, he hadn't had a sore throat since. He then sent Bond to Zanzarim to infiltrate its rebellious district of Dahum to eliminate its military head Solomon Adeka. Bond was later picked up bleeding out in a Dahumian airport and was sent to a covert operations hospital in Scotland. M paid Bond a visit, as he had some vacation time to spend in the area shooting. He had considered bringing Bond chocolate and grapes, but instead settled on a bottle of whisky, which they briefly shared before M departed.

Fleming based much of M's character on Rear Admiral John Godfrey, Director of Naval Intelligence of the Royal Navy, and Fleming's superior during World War II. After Fleming's death, Godfrey complained "He turned me into that unsavoury character, M."

Another possibility for the model of M was William Melville, an Irishman who became head of the Secret Service Bureau, the forerunner to both MI5 and MI6: Melville was referred to within government circles as M. Melville recruited Sidney Reilly into government service and foiled an assassination plot against Queen Victoria on her 1887 Golden Jubilee. Fleming's biographer John Pearson also hypothesised that Fleming's characterization of M reflects memories of his mother:

"There is reason for thinking that a more telling lead to the real identity of M lies in the fact that as a boy Fleming often called his mother M. ... While Fleming was young, his mother was certainly one of the few people he was frightened of, and her sternness toward him, her unexplained demands, and her remorseless insistence on success find a curious and constant echo in the way M handles that hard-ridden, hard-killing agent, 007."
― John Pearson, The Life of Ian Fleming.

Other possible inspirations include Lieutenant Colonel Sir Claude Dansey, deputy head of MI6 and head of the wartime Z network, who achieved different interpretations of his character from those who knew him: Malcolm Muggeridge thought him "the only professional in MI6", whilst Hugh Trevor-Roper considered Dansey to be "an utter shit, corrupt, incompetent, but with a certain low cunning". A further inspiration for M was Maxwell Knight, head of MI5, who signed his memos as "M" and whom Fleming knew well. The tradition of the head of MI6 signing their name with a single letter came from Mansfield Smith-Cumming, who would sign his initial "C" with green ink. 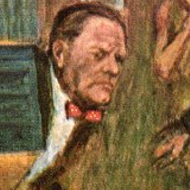 Retrieved from "https://jamesbond.fandom.com/wiki/M_(Literary)?oldid=99467"
Community content is available under CC-BY-SA unless otherwise noted.