Lieutenant Colonel Gareth Mallory (also known by the initial "M") is the current Head of Secret Intelligence Service — also known as MI6 — and is portrayed by actor Ralph Fiennes.

Introduced in the 2012 James Bond film Skyfall as the Chairman of the Intelligence and Security Committee, Mallory assumes the role of M following the untimely death of the outgoing Head of MI6.

Mallory is a former Lieutenant Colonel in the SAS, who served in Northern Ireland and spent three months as a hostage in the hands of the IRA. His distinguishing trait is that during his wrongful incarceration he steadfastly refused to divulge confidential information; a fact that seems to have impressed the originally cynical James Bond.

During the events of Skyfall, he is the Chairman of the Intelligence and Security Committee.[1] Acting as an intermediary between MI6 and the British government, his position gives him the authority to regulate MI6.[2] During his meeting with M, she at first thinks he is firing her but Mallory just wants her to retire. But she refuses and left early. He observed 007's evaluation and after the psychiatrist said "Skyfall", Bond just left. They first meet as M lies about 007's tests and before James left the room, Mallory asks Bond a question, 'Why not stay dead?" Bond who had been presumed dead, wished to take advantage of his perceived death to retire and enjoy a quiet life of leisure as a civilian. However, when Bond sees M and the rest of MI6 are under attack, he elects to drop the charade.

Later on, during the inquiry, Raoul Silva, who recently escaped after disabling MI6's defense system, breaks in with two other henchmen of his and plans on shooting M but Mallory manages to jump in the way and took the bullet to his left shoulder. Despite the injury, Mallory helped Eve and 007 by picking up a dead police officer's Glock 17 and shoots one of Silva's henchmen and after James shoots the fire extinguishers which created a smokescreen, Mallory helped Miss Moneypenny in evacuating the parliamentary ministers and inquiry members out of the courthouse building. He was treated by medics and was given an arm sling. Returning to MI6 after the firefight, Mallory discovered Q and Bill Tanner making a complex electronic trail for Silva to single-handedly to follow, hoping to help Bond and M lure Silva and his henchmen into a trap. To their surprise, he allows them to continue, warning them to not get caught by the Prime Minister. At the end of the film, due to her death, Mallory is given M's alias and position as head of MI6, with the former giving the top secret document to Bond in his next assignment, of which Bond accepts.

When M reads on the headlines about a collapsed building in Mexico, he shows 007 the Guardian newspaper in his office and asked him the purpose of his trip, replying that he was on a holiday. M grounds him temporarily from the field for taking the trip without an official authorization and that it could stir up an international incident. Soon after, a man from the Joint Security Service named Max Denbigh (who is named by the alias of 'C' by Bond), enters the office whom M introduces to 007. M is in the middle of a power struggle between Denbigh's Nine Eyes Committee which would eliminate the need for the "00" section.

When it emerges that C is an agent of villain Ernst Stavro Blofeld, M, Q, Moneypenny, Bond, and Tanner travel to arrest C and stop the launch of the Nine Eyes programme. En route they are ambushed and Bond is kidnapped. M and the others escape and proceed to wait for C in his office, arrest him and shut down Nine Eyes before it launches; in an ensuing struggle, C is killed. Bond comes close to executing Blofeld but then lets him be arrested by M.

Mallory has a very aloof, cynical and sarcastic personality. However, he respects M for her years of service to her country, and isn't cruel to her for her retirement. He is, however, skeptical to the fact that Bond came back after he had the perfect chance of retirement. He remains skeptical and doubtful towards Bond. He also sends Moneypenny to spy on him. It is revealed that Mallory fought against the IRA, and was a prisoner of war at the time. He was possibly embittered by this experience to the point of borderline social detachment to everybody else. This shows both loyalty and bravery hidden beneath Mallory's shell. He eventually comes to respect Bond and fights alongside him during the battle against Silva. He is highly intelligent, as he was the first appointed as the next head of MI6 after his predecessor died.

When first cast in Skyfall, many people speculated that Fiennes would play Bond's arch-nemesis Ernst Stavro Blofeld as Fiennes is often cast as a villain in most movies.

During the filming of Skyfall, the fact that Fiennes was to become the new M was a closely guarded secret.

Ralph Fiennes is the youngest actor in the role of M, being 49 when he first appeared in the role.

"Are you ready for your next assignment?"

"You are officially grounded 007" 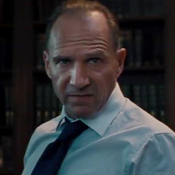 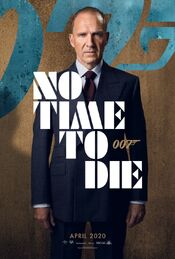