"Effective immediately, your licence to kill is revoked. And I require you to hand over your weapon. Now. I need hardly remind you that you're still bound by the Official Secrets Act."
― M[src]

After former M, Bernard Lee's death in 1981, the producers decided to hire actor Robert Brown to continue the role in the Bond films. Starting with 1983's Octopussy and lasted all the way to 1989's Licence to Kill, Brown would continue to play the character for the remainder of the Roger Moore era and both of Timothy Dalton's films. He would later be succeeded by Judi Dench in the 1995 film GoldenEye.

It is never explicitly stated onscreen whether Robert Brown's character is intended to be the same person played by Bernard Lee, or if he was intended to be Admiral Hargreaves, the role played by Brown in 1977's The Spy Who Loved Me, though the later Bond books retain Messervy. One thing to note is that in the pre-title credits to The Living Daylights, M is wearing a uniform with the insignia of a rear admiral. In The Spy Who Loved Me, Hargreaves is seen with the insignia of a vice admiral. Had Admiral Hargreaves indeed ascended to command MI6, it was implied he had suffered some adversity which resulted in his demotion, or financial law established M's renumeration at a level less than that of a 3-star admiral, and as such Hargreaves had to accept the pay and priviledges of the lesser rank.

As played by Brown, M lacks a sense of humor and has absolutely no tolerance whatsoever for Bond's antics. Brown's M came off tougher than his predecessor, angered that 007 was supposed to be preparing for a sanctioned MI6 mission, not pursuing Franz Sanchez out of a personal vendetta, and made an immediate decision to revoke Bond's licence to kill in the film Licence to Kill when Bond went off on a vendetta. This matched the tone of his final two films as well as Timothy Dalton's incarnation of Bond.

Despite this formality, also Brown's M has a strong liking for 007; after Bond rushes off after the revoke of his 00-Licence, M stops an agent from planning on shooting Bond as there were in his words "too many people" and just says "God help you, Commander".

If Brown's M was indeed Hargreaves, he would be the only M whose surname did not begin with the eponymous letter. Some fanon has identified him as "Marion Hargreaves", but his forename has yet to be considered canonical in the same manner if Admiral Hargreaves was promoted to M.

M gives James Bond his briefing surrounding a ring of fake Fabergé Eggs, telling Bond of such an egg up for auction; "Property of a Lady". When Bond attempted to "puff" the auction by driving up the price, to annoyance of Kamal Khan, M then gives Bond a dressing down saying his business was to track Khan and Magda, not bid on the egg. Bond covers himself saying that he would have proven the egg was a fake, and M accepts the explanation when presented the real egg, making Bond sign a waiver declaring it MI6 property, then directs 007 to Rajasthan, India. He later ventures into West Berlin to discuss Bond's situation and give 007 further instructions.

A View to A Kill

While Sir Fredrick Gray is initially concerned about MI6 launching an investigation into Max Zorin's operations, M gives Bond his permission after Q demonstrates the microchip to Bond and shows that it is the property of Zorin Industries. M later shows his annoyance to Bond about his reckless antics in pursuit of Achille Aubergine's assassin (May Day), who managed to flee. M says that Bond broke multiple parts of the Code Napoleon and that it will take a while for London to mend fences with Paris (dryly noting the two cities are not the reputable for friendliness to begin with).

M organises a training exercise for his 00 Agents, and is seen giving a briefing in a makeshift office inside a cargo plane high above the Rock of Gibraltar. Later, M scoffs at Bond's feelings that the mission to kill General Leonid Pushkin could be more than it seems, telling him that if he is not willing to take on the assignment he would get 009 to replace him.

M is very abrupt and harsh with Bond when he confronts him in Florida about the neglect of his duties, due to his investigations into Felix Leiter's mutilation, which caused him to miss a sanctioned MI6 mission in Indonesia. After M harshly criticizes Bond for lack of professionalism and objectivism, Bond refuses to let the matter go and instead hands in his resignation, where M quickly remarks, "We're not a country club, 007!" and immediately revokes his licence to kill. He reminds Bond that he is still obliged to the Official Secrets Act before Bond remarks that this is a farewell to arms and fights off M's entourage, dodging fire from an MI6 sniper as he escapes. M orders his men to hold their fire, and watches as Bond vanishes from the scene as M remarks "God help you, Commander" as he becomes shocked to see Bond running off.

He is again seen in London criticizing Miss Moneypenny for making typing errors and for not putting her personal feelings for Bond aside whilst he goes rogue. M then dispatches his agent stationed in Isthmus City to recapture Bond and send him back to England, an effort that ultimately failed. Later, after Bond kills drug lord Franz Sanchez, Leiter informs Bond that M has re-admitted him to MI6. 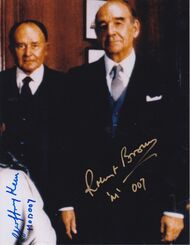 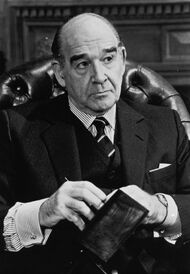