For Your Eyes Only
Margaret Thatcher (13 October 1925 – 8 April 2013) was the real-life Prime Minister of the United Kingdom from 1979 to 1990 and the Leader of the Conservative Party from 1975 to 1990. She was the longest-serving British Prime Minister of the 20th century. She was the first female Prime Minister, and one of two women to ascend to the office so far. A Soviet journalist called her the "Iron Lady", a nickname that became associated with her uncompromising politics and leadership style. This name caught on with the US and across the UK over another incident, where she planned to deliver a speech at a conference at a hotel in Brighton in 1984. Irish terrorists planted a bomb in the lobby, which detonated, but Margaret Thatcher narrowly escaped. This act bolstered her reputation among the taxpayers.

She appeared in the 1981 James Bond film For Your Eyes Only, portrayed by actress and impressionist Janet Brown. English actor John Wells (who had previously made a cameo appearance in the 1967 spoof Casino Royale) played her real life husband Denis.

At the very end of For Your Eyes Only, Bond and Melina Havelock spend a romantic evening aboard her father's yacht, only to be interrupted by a communique from Q and Tanner via his wristwatch. Rather than exchanging pleasantries, Bond gives the watch to Melina's talking parrot Max, who is inadvertently put through to the Prime Minister who wishes to personally congratulate 007 for completing his mission. While Bond and Havelock go skinny-dipping the parrot converses with the PM, brought to an abrupt halt when the bird proceeds to repeatedly ask Thatcher for a kiss. 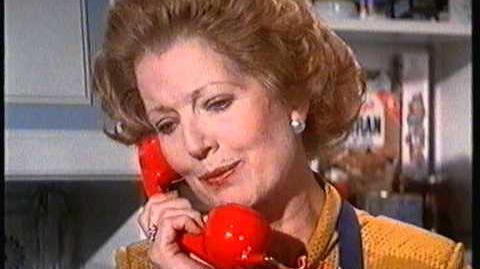 JAMES BOND AND MAGGIE THATCHER
Add a photo to this gallery

Retrieved from "https://jamesbond.fandom.com/wiki/Margaret_Thatcher?oldid=91601"
Community content is available under CC-BY-SA unless otherwise noted.