The Log Cabin Girl is a fictional unnamed KGB honeytrap who acts as bait in a Soviet attempt to assassinate James Bond. A minor character, she appears in the 1977 James Bond film The Spy Who Loved Me, portrayed by actress Sue Vanner, and was subsequently adapted for Christopher Wood's accompanying novelization, where she was given the name Martine Blanchaud.

Log cabin girl: "But, James, I need you!"
James Bond: "So does England!"
―James Bond prepares the leave the cabin. —

This unnamed girl is seen making love to James Bond in a log cabin located on the top of the French Alps. As the two lie together on a fur rug, Bond receives a telex message via his watch ordering him to report back to MI6. 007 meets the girl's protests with a casual "sorry darling, something came up." As Bond pulls on his clothes a group of four armed men approach the cabin on skis. As soon as Bond leaves, she is revealed to be working with the KGB. Extracting a radio transmitter from a nearby handbag, she informs the leader of the group - KGB agent Sergei Barsov - that Bond has just left. Barsov acknowledges her message, leading to a chase sequence across the alps which results in Barsov's death. The girl is not seen again and her fate is left unrevealed. 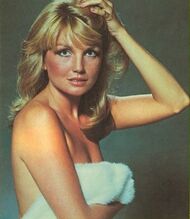 Retrieved from "https://jamesbond.fandom.com/wiki/Martine_Blanchaud_(Sue_Vanner)?oldid=99112"
Community content is available under CC-BY-SA unless otherwise noted.