James Bond Wiki
Register
Don't have an account?
Sign In
Advertisement
in: James Bond characters, Film characters, The Man With The Golden Gun characters,
and 10 more

Mary Goodnight is a fictional inexperienced field operative and the main Bond Girl in the 1974 James Bond film The Man with the Golden Gun. Portrayed by Swedish actress Britt Ekland, Goodnight is based on the literary character who appeared in several Ian Fleming's novels.

Mary Goodnight is a Secret Service staffer, more ditzy than in the novels, who assists James Bond when he is following Andrea Anders in Hong Kong. Very quickly it is established that she has as-yet unfulfilled desires toward Bond.

Bond: "Now, Goodnight, would I do that to you? [Speaking of cheating on her.]"
Goodnight: "Yes, James, you bloody well would!"
―[src]

After Goodnight shows Bond where Miss Anders is staying, she hopes to spend the evening with Bond, but 007 declines, as he has his meeting with Hai Fat. Goodnight later avoids Bond's advances, as she sees that he just has pity on her.

Her playing hard to get doesn't last long, and goes to meet Bond in his room anyway. She is then embarrassingly pushed into the wardrobe of Bond's hotel room when Miss Anders enters Bond's bedroom. Goodnight falls asleep in the closet as Anders and Bond have sex; after Anders leaves, Bond wakes Goodnight and condescendingly tells her "Your turn will come, I promise." After this event, Goodnight becomes cold in her attitude towards Bond, particularly when interacting with him in Scaramanga's presence.

At the meeting point with Miss Anders, Goodnight takes control of the Solex, but whilst placing a homer on Francisco Scaramanga's AMC Matador, she is spotted by Scaramanga himself and pushed into the car's boot (trunk). On Scaramanga's island, Goodnight becomes Scaramanga's new mistress and is forced to wear a bikini at all times to prevent her from carrying concealed weapons, and to bypass Q's trackers that had been sewn into all of Goodnight's clothing. She is offered all the luxuries the island has to offer as she spends the next few days sunbathing, swimming, dining with Scaramanga but also endures harassment from the maintenance man, Kra. One day she is ordered to eat lunch with Scaramanga and to her surprise and delight, Bond has arrived on the island. During the meal, Goodnight compliments Scaramanga's hospitality with a bitter tone while glaring at Bond, hinting to him that she blames him for her imprisonment and humiliation. She then quickly becomes worried when Scaramanga challenges Bond to a duel.

During the duel of the two, Goodnight is guarded by Kra. Eventually, she senses an opportunity to escape and knocks him into a pool of liquid helium. Following Scaramanga's defeat, Bond and Goodnight are reunited. Bond retrieves the Solex and the two manage to escape and after dealing with Nick Nack, Goodnight manages to finish what she started with Bond aboard Scaramanga's personal Chinese Dhow (slow boat from China).

As a British Secret Service agent who has been active for many years, Mary Goodnight is a courageous woman who can hold her own even with men. However, she is also extremely clumsy in many areas, to the point of being more of a nuisance than an asset to the agents she assists like Bond. Goodnight is also naive, inexperienced and lacking in general knowledge; for example, she does not know how a solar power plant works. Goodnight seems to like to joke around on her missions, but her sense of humour is quite sarcastic as she uses it mostly when she is angry. Despite this, her dedication more than make up for her clumsiness, making her a funny and very endearing person. 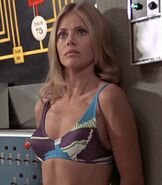 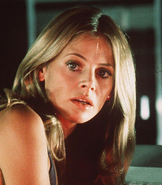 Goodnight meets Bond outside his hotel.

Goodnight returns to Bond's room in a nightie.

Goodnight hides under the bed covers as Anders and Bond talk.

Bond lets Goodnight out of the closet.

After trying to placing a homing device in Scaramanga's car, she gets kidnapped by the assassin himself and taken to his island.

Goodnight is happy to see Bond has come to rescue her.

Bond dines with Scaramanga and Goodnight.

Goodnight is held captive by Kra during Bond and Scaramanga's duel.

Seeing a chance to escape, she knocks Kra into one of the liquid helium tanks.

She happily reunites with Bond who has won the duel and killed Scaramanga.

They go to back to plant realising that the liquid helium tank where Kra fell is now overheating with little time left to get the Solex.

Bond and Goodnight enter the solar control room to retrieve the Solex.

Whilst observing what Bond is doing, Goodnight accidentally triggers the solar collector.

After Bond tells her of her mistake, Goodnight asks Bond how to shut off the power.

At Bond's suggestion, she pushes every button she can.

With the Solex successfully obtained they leave the exploding island and escape on Scaramanga's junk.

Now safely on board and alone, they take this opportunity to have a time of intimacy.

However they are soon interrupted when Nick Nack attacks them.

After getting rid of Nick Nack, they continue where they left off.

They are soon interrupted again by a phone-call from M.

After fooling around on the phone with M, Bond finally hangs up. "Goodnight Sir!" 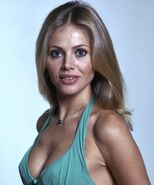 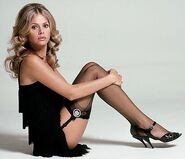