James Bond Wiki
Register
Don't have an account?
Sign In
Advertisement
in: James Bond characters, Film characters, A View To A Kill characters,
and 20 more
English

Zorin is a product of genetic engineering and could be Albino

Deceased; fell to his death

"This'll hurt him more than me!"
― Max Zorin during his attempt to shake Bond off his airship[src]

Maximillian "Max" Zorin[1] is a fictional former German KGB intelligence operative and wealthy industrialist. He acts as the main antagonist in the 1985 James Bond film A View to a Kill and was played by American actor Christopher Walken.

The character appeared in the film's accompanying video games, and was subsequently adapted for the 1983-87 tabletop role-playing game James Bond 007. Zorin was later mentioned in the video-game Everything or Nothing (2003) and appeared as a playable character in Nightfire (2002), GoldenEye 007: Reloaded (2010) and 007 Legends (2012).

Max Zorin was born in Dresden around the end of the Second World War, after which Dresden became part of East Germany. He later moved to France and became a leading French businessman, operating on the microchip market. However, it is revealed later in the movie that he was the product of Nazi medical experimentation during World War II, authorized by Hitler in which pregnant women were injected with massive quantities of steroids in an attempt to create "super-children." Most of the pregnancies failed. The few surviving babies grew to become extraordinarily intelligent—but also psychopathic.

After the war, Hans Glaub, the German scientist who conducted the experiments, was spirited away by the Soviet Union, where he continued his experiments with steroids, although the Politboro had different concepts than the Reichstag - they wanted Glaub to make steroids for athletes in order to showcase the USSR in the Olympics and similar sporting events. It is strongly implied that the young Zorin was raised by Mortner, who was one of Zorin's closest allies in the movie, and explicitly stated that Zorin was trained by and long-affiliated with the KGB. Among other activities, Mortner organizes a doping program for Zorin's thoroughbred race horses, allowing Zorin to win horse races with ease by means of implanted microchips; since the drugs are 'administered' during the race. The racing authorities are on the lookout for drugs and painkillers, which is not what is administered to the horses; rather the microchips activate a natural steroid which gives the horse a boost, and dissolves after a brief period in the bloodstream.

Despite Zorin's longtime KGB affiliation, his outside activities draw attention that the KGB sees as unwelcome, and at a meeting between Zorin and KGB head General Gogol, Gogol rebukes him. Zorin responds by telling Gogol that he no longer considers himself a KGB employee.

Zorin forms a plan, dubbed Project Mainstrike to destroy the heavy American competition in Silicon Valley by triggering a massive earthquake in the San Andreas Fault at high tide, causing the valley to flood. Such a disaster would effectively wipe out all computer companies competing against Zorin in the world microchip market and leave him as the leading supplier of microchips, as well as slaughtering millions residing in the valley. His plan was to use his vast resources to set off a super-earthquake in both the San Andreas Fault and Hayward Fault by flooding them both with water from San Andreas Lake and then breaking the geological lock that forbade both faults from moving simultaneously. To accomplish this, Zorin mined underneath the lakes and planned to blast through the lake beds in order to flood the fault, further exacerbating it by pumping water into them via a vast system of oil wells. Once the floodwaters came in, he would set off the explosives necessary to break the lock.

Zorin's plan is foiled by James Bond and Zorin's former lover and henchman May Day, who joins Bond's side after Zorin attempts to kill her, having already killed most of his workers as well as May Day's friend Jenny Flex, and sacrifices her life to ensure that the bomb set by Zorin could not trigger the quake - she was killed in the explosion seconds after managing to push a trailer full of explosives out of the valley and into open air.

Bond and his partner Stacey Sutton both witnessed the explosion, which infuriated Zorin and made him even more determined to gain revenge on Bond. When leaving the valley in his airship with his right-hand man Scarpine and Mortner, he captures Stacey and makes away with her, only for Bond to grab hold of a mooring rope as the airship heads for the Golden Gate Bridge. Zorin attempts to kill Bond by flying him into the framework of the bridge, but Bond manages to hold on and bring the airship to a halt by mooring it to the framework. Stacey attacks Zorin and as Scarpine and Mortner try to stop her, the airship crashes into the side of the bridge, knocking Mortner unconscious. Zorin sends Scarpine to kill Bond, but Stacey smashes him round the back of the head with a fire extinguisher, knocking him out too. Stacey then escapes onto the bridge's support cable to join Bond, but is closely followed by Zorin who viciously attacks Bond with a fire axe. After a brief scuffle, Bond causes Zorin to lose his grip on the framework, which makes him fall into the sea below. The impact shatters his entire body and he drowns, avenging the deaths of May Day and everyone else he killed.

"And I thought that CREEP loved me!!"
― May Day being angry at Zorin for betraying her and her associates.[src]

Being the result of biological experiments conducted by Dr. Mortner on pregnant women, Max Zorin was a very psychopathic and sadistic man who was willing to let millions die for personal profit and practically reveled in what he was. He even displayed a near-total lack of loyalty to his own men, having personally drowning and sadistically gunning down hundreds of his own mine workers out of a mix of no longer seeing value in them and simply for the sick thrill of it. Dropping an investor to his death who was uncomfortable joining in his plan, shooting a city official who was assisting him in a small way to frame it on Bond and Stacey, and especially dropping a soviet spy into a underwater turbine are also clear demonstrations of how casually murderous and depraved he is. In addition, his plan to create a double earthquake to cause a massive flood to submerge the Silicon Valley to monopolize the microchip market was astonishingly bad, with only a handful of other Bond villains having plots on a similar scale and involving similar amounts of collateral damage. Zorin so fitted the profile of a vindictive, machiavellian villain, who would change his allegiance at the drop of a hat if it fit his grander scheme.

Despite his long-standing and intimate relationship with May Day, who seemed like his lover and the single closest person to him, he willingly sacrificed her for the sake of his plans, although this betrayal turned against him later on. While he seemed loyal to Scarpine, his head of security, seeing him as a right-hand man, it was only in the capacity as his head of security, keeping Zorin's person safe until the point where he made the rash decision to fight Bond one-on-one atop the Golden Gate Bridge. Scarpine outlived Zorin (albeit very briefly), although it would have been likely Zorin may have also killed him had he seen an opportunity to advance his plans, or likely felt little remorse had Scarpine been killed by Bond. The only man Zorin showed loyalty for until the end was Hans Glaub, arguably viewing him as a stepfather. However, while the latter showed some genuine care for him, most notably when Zorin fell to his death, which visibly upset him and leaded to him trying to get revenge on Bond and Stacey for it, Zorin doesn’t really showed any for him. The most affection he showed is when he briefly putted his arm around Mortner's neck while gloating about the success of his plans, and notably, when Glaub got temporarily knocked out from the blimp crashing as a result of Stacey’s meddling, Zorin doesn’t even acknowledged him, letting alone show any concern for his well-being.

Nevertheless, despite his extreme cruelty, Zorin was well spoken and extraordinarily intelligent, and showed an impressive degree of self-control whenever it benefits him to do so and at faking affability and civility in general to the point that even British Defense Minister Fredrick Gray thought his profile was most reliable. He also would have likely realized the Golden Gate was a poor choice for a battleground, but was so overcome with hatred for Bond that his inherent psychosis overruled caution, which contributed to his demise.

After the general disappointment of the preceding film, Octopussy, Albert Broccoli was under the impression that the attitude of Bond films had to change. One was the feeling among moviegoers that Bond films had become too reliant on Sean Connery-style humor. Another was the increasing disdain for Bond casually bedding woman after woman. The sexual revolution of the 1960s had largely been enfeebled by the threat of HIV/AIDS being medically proven to be linked to casual sex. Broccoli elected to tackle the former problem first, and had proposed the character of Max Zorin written expressly for one actor: David Bowie. Bowie. a popular musician in the UK, was believed to have the villiainous attitude to attract the next generation of Bond fans, to the extent that early promotions for the film went so far as to showcase Bowie. Bowie, who was a Bond fan, expressed his concern that his appearance in the film could damage the film series' reputation, degenerating it into the same kind of problems that befell the reputation of Batman, which at the time was less known for the edgy comics, but rather the campy TV series of the 1960s which often used famous celebrities and singers as guest villains. Bowie declined the role, and Mick Jagger was also approached for the part of Zorin. Jagger expressed similar concerns to Bowie and also declined. The role ultimately went to Christopher Walken, who had a reputation for unstable characters akin to Zorin. Seven years after View to a Kill, Walken would play a similar villain with the same forename in Batman Returns, a sinister white-collar criminal named Max Schreck.

Broccoli elected to tackle the issue of Bond's promiscuity in the next films, The Living Daylights and License to Kill. In the film following View to a Kill, Bond is seen loyal to one girl throughout the whole film.

Meeting with the investors.

Burning down the City Hall.

Zorin guns down his workers. 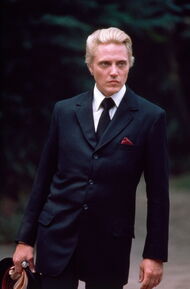 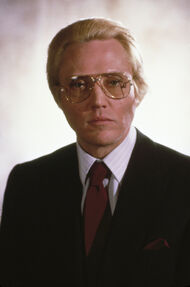 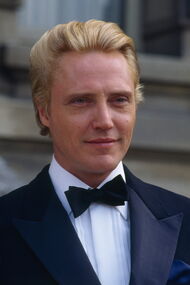 Max Zorin as he appears in Goldeneye 007 reloaded.