Maximillian Largo was a fictional Romanian philanthropist and a high-ranking operative of the famous criminal organisation SPECTRE. The character served as the main antagonist in the 1983 unofficial James Bond film Never Say Never Again and was portrayed by Austrian actor Klaus Maria Brandauer. He is a re-imagining of the literary and film character Emilio Largo, who first appeared in Ian Fleming's 1961 novel Thunderball and was subsequently adapted for EON Productions' 1965 James Bond film of the same name.

Maximilian Largo was born in Bucharest, Romania, in 1945, making him 38 when the events of the film take place. In the present, he is a well known, blond-haired, millionaire and philanthropist, who secretly works for the evil organisation SPECTRE. As in the novel Thunderball, Largo is "Number One" in the SPECTRE hierarchy; however, unlike the EON film series, the number does not directly correlate with the member's importance or seniority. Largo is the supreme commander of the organisation's latest and grandest extortion exercise dubbed The Tears of Allah.

Largo's two main headquarters are his super-yacht The Flying Saucer, which is the original translation of the name in the Thunderball novel, and a Moorish castle Palmyra located on the north coast of Africa.

Largo is also a skilled game designer, having created a video game called Domination, a two-player game where one player, as red, battles another player, being blue, in real-world nations on a video screen. The object of the game is to make regions of the country match your color while fending off the other player's attempts to do so. Each game also pays a corresponding amount of money, dependent on the size of the nation, which the loser must pay, as well as receiving an electric shock of increasing intensity. A player who removes his hands from the joystick automatically loses. After losing a few games, James Bond wins a potentially fatal game for control of the entire world when Largo takes his hands off the joystick. He declines Largo's offer to pay up, instead settling for a dance with his mistress, Domino Petachi.

Largo's scheme in Never Say Never Again, is based on the same basic plot as Thunderball which was unique at the time. It involved the theft of two nuclear warheads from radio-intercepted test cruise missiles serendipitously armed with real warheads, launched from United States Air Force base in the U.K. during a joint NATO exercise. Ditching the missiles into the sea to be recovered and then use to hold the world hostage by threatening to detonate the one of two devices somewhere in the world possibly under the White House unless they paid the ransom of £100 million British pounds. Largo intends that threat to be a check against being stopped from his plot to destroy the world's oil reserves in the Middle East. The basic nuclear ransom scheme has been used countless times since Thunderball and Never Say Never Again and is even a joke in the Austin Powers series of movies. After a long period of other plotlines, the nuclear ransom scheme was revisited in The World Is Not Enough, albeit with a new twist. Rather than demand a large ransom, the plan was to ruin oil shipments out of the Caspian Sea through irradiation, which would mean only one pipeline was left that could do so.

He is killed by Domino, being shot in the back with a harpoon gun during an undersea cave fight over control a nuclear weapon, being placed in a key geologic location called The Tears of Allah, which will destroy the Middle East's underground oil reserves.

Never Say Never Again marked the high-point of a long legal battle between United Artists and Kevin McClory. For more information see: the controversy over Thunderball. 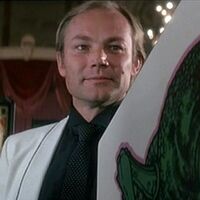