Michael Gregg Wilson, OBE (born January 21, 1942) is the stepson of Albert "Cubby" Broccoli, and has worked as a producer and/or screenwriter on every James Bond film since Moonraker. He currently co-produces the films in the series with his half-sister, Barbara Broccoli.

Wilson was born in New York City, New York, the son of Dana (née Natol) and actor Lewis Wilson.[1] After the couple divorced, Dana Wilson met Albert Broccoli in 1959, and married six weeks later.[2] They had a daughter together, Barbara Broccoli, and Albert Broccoli acted as a mentor to Wilson. Broccoli insisted on keeping his family close to him when possible. Consequently the children grew up around the Bond film sets, and his mother's influence on various production decisions is alluded to in many informal accounts.[3]

After graduating from Harvey Mudd College in 1963, Wilson worked in the engineering industry before enrolling in Stanford University to study law. Wilson practiced at a local law firm, and then moved to Washington DC after being offered a position to work for an international law firm. Wilson spent six years in the law industry before joining to work at EON Productions.[4]

Wilson worked in Eon Productions' legal department until taking a more active role as an assistant to his stepfather, Cubby Broccoli, for The Spy Who Loved Me. In 1979, Wilson served as executive producer on Moonraker until he was promoted to co-producer in A View to a Kill. Meanwhile, Wilson also acted as screenwriter on many of the the Bond films, starting with For Your Eyes Only, which he co-wrote with longtime screenwriter Richard Maibaum. The Wilson and Maibaum team would later pen the next three Bond films in the series, before Wilson was forced to work alone on Licence to Kill due to the 1988 Writers Guild of America strike. Following the retirement of Maibaum, Wilson worked with Alfonse Ruggiero, Jr. on a 17-page treatment for Timothy Dalton's proposed third Bond film before the project was cancelled by EON Productions[5]; the eventual next film in the franchise, GoldenEye, bore no relation to Ruggiero and Wilson's work.

After the six-year haitus, Wilson began his collabration with his half-sister, Barbara Broccoli, on GoldenEye and all of the subsequent Bond films starring Pierce Brosnan and Daniel Craig.

Alongside his production work on the series, Wilson has had cameos in every James Bond movie made since 1977, as well as a cameo role in Goldfinger from 1964 (making him second only to Desmond Llewelyn in terms of repeat appearances in the series). His cameos have mostly been non-speaking roles, and all but two were uncredited. He has had two separate cameos in three of the Bond films.

A full list of his cameo appearances is below. 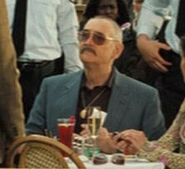 Appearing in Quantum of Solace (2008)