Lonsdale was born in Paris and raised by a French mother and an English father, initially on the island of Guernsey, then in London in 1935, and later, during the Second World War, in Casablanca, Morocco. He moved to Paris to study painting in 1947 but was drawn into the world of acting instead, first appearing on stage at the age of 24.

Lonsdale was bilingual and was in demand for English-language and French productions. He is best known for his roles as the villainous megalomaniac Hugo Drax in the 1979 James Bond  film, Moonraker. His other acclaimed films include The Trial, Day of the Jackal, (with Edward Fox) The Name of the Rose (with Sean Connery), Remains of the Day, Munich (with Daniel Craig and Mathieu Amalric) and Ronin (with Jonathan Pryce and Sean Bean).

He also played the voice of Hugo Drax in the 007 Legends.

Michael Lonsdale passed away on September 21, 2020 at the age of eighty-nine in Paris. 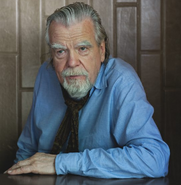 Lonsdale in later years
Add a photo to this gallery
Retrieved from "https://jamesbond.fandom.com/wiki/Michael_Lonsdale?oldid=96271"
Community content is available under CC-BY-SA unless otherwise noted.