James Bond: "If I don't report in by tomorrow, not only will my people, but the entire Greek police, will come down on you like a load of bricks."
Columbo: "By tomorrow, we'll be good friends. Let us drink to that."
―James Bond and Milos Columbo.[src]

Milos Columbo is a fictional Greek smuggler and rival of Aris Kristatos. Based on Enrico Colombo from Ian Fleming's short story "Risico", the character appeared in the 1981 James Bond film For Your Eyes Only and was portrayed by Chaim Topol. He also appeared in the comic adaptation of the film by Marvel Comics.

Columbo is first mentioned by Aristotle "Aris" Kristatos when he meets James Bond in the Italian ski resort of Cortina, where he mentions that Columbo is known as "the dove". Bond realises that Emile Leopold Locque leaves a dove-shaped badge at the scene of his crimes, for instance the murder of agent Luigi Ferrara, who was stabbed to death while waiting in Bond's car.

Whilst Bond and Kristatos attend dinner at a casino/restaurant, Kristatos informs Bond about Columbo being involved with various dubious enterprises, where in fact Kristatos is describing himself. Kristatos points out Columbo who is sitting a number of tables away with Countess Lisl von Schlaf. After causing a scene, Lisl walks out the restaurant, and even though the possibility of a trap exists, Bond follows and decides to play the odds. Spending the night with Lisl, she is tragically killed the next morning after being run over by Locque. Columbo's men (unknown to Bond at this point) save his life, knock him out, and then take him to meet Columbo aboard his yacht.

After explaining that he is actually Bond's ally, Columbo proves his intentions when Bond accompanies him when they raid at one of Kristatos' opium-processing warehouses in Albania under the cover of darkness. Columbo's men begin to open fire and Bond cautiously pursues the fleeing Locque into the warehouse. Bond and Columbo take control of the warehouse, narrowing escaping when Locque detonates explosives inside. Bond then cleans up matters when he kills Locque by pushing his car over a cliff after a tense sequence.

After Columbo provides the location of Kristatos' mountain retreat, he plays an important part alongside Bond, with the help of Melina Havelock, in the attack at the finale of the film. Columbo also plays a crucial role in stopping Kristatos from reaching the helipad where General Gogol is waiting to collect the ATAC communicator. While Bond convinces Melina not to kill Kristatos, he slyly gets a knife out his pocket, but is killed when Columbo throws a knife into his back. Columbo then became the incumbent sponsor of ice skater Bibi Dahl. 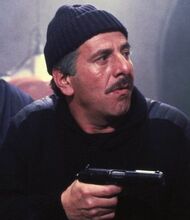 Retrieved from "https://jamesbond.fandom.com/wiki/Milos_Columbo?oldid=101684"
Community content is available under CC-BY-SA unless otherwise noted.