Milton Krest was a fictional marine researcher and narcotics smuggler; who used his company, Wavekrest Marine Research, to move cocaine for the Sanchez Cartel. Based loosely on the literary character who appeared in the Ian Fleming short story, The Hildebrand Rarity, Krest is the secondary antagonist of the 1989 James Bond film Licence to Kill, portrayed by American actor Anthony Zerbe. The character also appeared in John Gardner's accompanying novelization.[1]

Appearing in the 1989 film Licence to Kill, Milton Krest is the owner of the Ocean Exotica warehouse in Key West, Florida and the Wavekrest, a marine research vessel. Both serve as convenient covers for drug lord Franz Sanchez's U.S. and Caribbean drug operations. Once an imposing man, Krest is now Sanchez's alcoholic puppet[1], who peeks through windows at his boss' girlfriend Lupe Lamora. Krest uses his organization to help rescue Sanchez after he is arrested by the American authorities, and is also present during Sanchez's brutal maiming of Felix Leiter. James Bond visits Krest at his marine research facility to find clues about Sanchez and his whereabouts, breaking into the warehouse at night and discovering cocaine hidden in maggot incubators. 007 later infiltrates the Wavekrest and ruins a drug shipment being managed by Krest and his crew, as well as stealing five million dollars of Sanchez's money. Krest orders his men to try and kill Bond, but the spy manages to escape in the drug runners' seaplane.

Krest becomes a victim in Bond's quest to exact vengeance on Sanchez for maiming his friend Felix and murdering his wife, Della. After gaining Sanchez's trust and convincing him that someone is trying to have him killed, Sanchez suspects Krest and visits him on-board the Wavekrest that night. With the help of Pam Bouvier and Q, Bond plants some of the money he had stolen from Sanchez in a decompression chamber inside the boat, leading Sanchez to believe that Krest had hired a team of hitmen to assassinate him and was using his own money to pay them off. A furious Sanchez kicks Krest inside the decompression chamber and gradually turns the pressure valve to an extreme level, before rupturing the vent with an axe. The rapid decompression causes Krest's head to expand and then violently explode, splattering the porthole window, and the money, with blood. 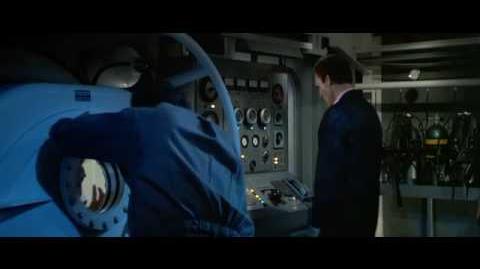