Deceased; stabbed in the chest by Giacinta Johnson

"I can read your every move!"
― Miranda Frost's last words while taunting Jinx.[src]

Miranda Frost was a fictional intelligence operative working for the Secret Intelligence Service (SIS/MI6); however, her true allegiance lies with infamous diamond magniate Gustav Graves. A secondary antagonist and Bond girl portrayed by British actress, Rosamund Pike, the character first appeared in the 2002 James Bond film Die Another Day, and was also featured in the film's accompanying novelization, penned by Raymond Benson.

Miranda is a Harvard-educated, gold medal-winning Olympic fencer (trained by Verity) posing as Graves' publicist and fencing partner. She won gold at the 2000 Sydney Olympics by default, after Graves organized the real gold medalist's death by drug overdose. This earned Graves Miranda's allegiance.

While James Bond is sent to kill North Korean Colonel Tan-Sun Moon, Miranda secretly sends Bond's true identity to Moon's right-hand man, Zao. This leads to Bond's imprisonment at a North Korean torture camp, where he is brutally interrogated for 14 months before being exchanged for a captive Zao.

Working as a Double Agent

Miranda is sent by M to work alongside Bond, but does not approve of Bond's methods. When caught by Mr. Kil and his minions, Miranda helps Bond keep incognito by kissing him. They later spend the night together in Miranda's suite to keep up the pretense that they are lovers.

When Bond awakens and goes after Graves, Miranda pleads for him not to go, but he insists. Later when Bond faces Graves at gunpoint, Frost arrives as well, also aiming her gun at Graves. However, Graves asks Bond whether he already found out who betrayed him in North Korea, prompting Miranda to aim her gun at Bond, revealing that she was the one who betrayed Bond. 007 attempts to kill her, but realizes that his weapon is empty. While in bed together, Miranda had taken the opportunity to empty his Walther P99.

With Miranda's pistol trained on him and escape looking unlikely, Bond uses the sonic agitator ring - provided by Q - to shatter the glass platform on which they were both standing. Miranda and Bond fall into the jungle environment of Graves' geodesic dome (a structure alongside Graves' Ice Palace) after attempting to murder Bond with Graves' satellite weapon, Icarus, the villains leave aboard an Antonov An-124 aircraft.

Eventually Bond and his American NSA counterpart, Jinx Johnson catch up with Graves and Miranda in North Korea. Boarding Grave's Antonov, the pair split up; but Jinx is caught by Miranda at the controls of the aircraft. Miranda and Jinx have a climactic sword fight aboard the descending plane.

Miranda narrowly slices Jinx across the stomach, mocking Jinx by informing her that she can read her foe's every move, but Jinx manages to impale a dagger that was stuck on a copy of "The Art of War" into Miranda's chest. As Miranda looked down in shock, Jinx retorted "read this, bitch", punctuating it with a kick that forced the knife in deeper and Miranda fell backwards; stone dead.

Bond was later shown to have mourned Miranda; clearly showing, that despite her treachery, that he did love her.

Miranda Frost was a dangerous, experienced and dark woman who was willing to do anything to help Moon in his plans, even if it meant using her charms to seduce her enemies and lure them into traps. Her beauty was such that men could easily fall for her, allowing her to manipulate them easily while giving her a distinct advantage in hiding her true nature and making her appear to be an intelligent and innocent MI6 agent.

Like Miranda's boss, she was also a conscientious and thoughtful person who executed her actions with care whether as Moon's ally or as an MI6 agent. Thus, she was even able to easily deceive the M very experienced but also Bond and all her colleagues in the British secret service.

In the field, Miranda was also unimpressed by her opponents and her great skill in fencing combined with her MI6 training and her mastery of firearms allowed her to gain the upper hand but also made her excessively arrogant to the point of underestimating her antagonist, a weakness that ultimately led to her downfall at the hands of Jinx. 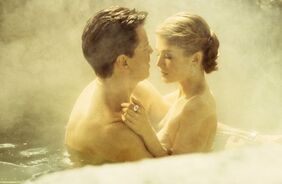 Miranda at the Fencing training centre. 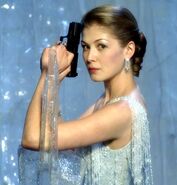