Miss Moneypenny, is a fictional character in the James Bond novels and films. She is secretary to M, who is Bond's boss and head of the British Secret Service.

Although she has a small part in the two films, it is always highlighted by the underscored romantic tension between her and Bond (something that is virtually nonexistent in Ian Fleming's novels, though somewhat more apparent in the Bond novels of John Gardner and Raymond Benson). On that note, she is not always considered to be a Bond girl, having never had anything more than a professional relationship with Bond, to her dismay. According to the movie You Only Live Twice, she holds the rank of Second Officer in the Women's Royal Naval Service.

Miss Moneypenny helps investigate the sniper in Bratislava for Bond. She discovers for him that she was the cellist at the concert, Kara Milovy. Moneypenny informs Bond that he is required to attend a debriefing after General Koskov's defection and gave him a list of items to pick up from Harrods's on the way. She jokingly bantered to Bond that he was welcome to join her at her house and listen to her Barry Manilow collection.

Moneypenny is seen being criticized by M for making several typing mistakes on some papers, and for her lack of professionalism in dealing with Bond's resignation from Her Majesty's Secret Service. She was worried sick about Bond and calls Q Branch. Q takes some leave and aids Bond in the field in Isthmus against Franz Sanchez.

Following Lois Maxwell's departure from the series in 1984, a new Moneypenny was chosen to star alongside the new James Bond, Timothy Dalton. At the age of 26, Caroline Bliss replaced the long-standing Lois Maxwell in the films The Living Daylights and Licence to Kill. According to Bliss it was her idea to wear glasses in the role, in order to further distance herself from Maxwell's portrayal of Moneypenny.

When Dalton's tenure as Bond came to an end, the role of Miss Moneypenny was recast to - unbeknownst to casting director Debbie McWilliams - Bliss' childhood friend, Samantha Bond. The pair had been friends since they both were eleven years old. Not expecting to return after the departure of Timothy Dalton anyway, Caroline harbored no ill feelings towards her friend, saying, "I am just glad it has gone to someone I love and who needs the money!" 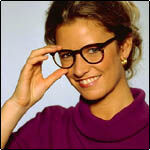