Mademoiselle La Porte is a fictional character from the James Bond film and novel Thunderball. In the film, she is played by Eurasian strip tease artist and actress Maryse Guy Mitsouko, although her voice was dubbed by Catherine Clemence.

Bond and his French liaison, Mlle. La Porte, were present at the funeral of SPECTRE number 6, Colonel Jacques Bouvar, investigating his apparent death. After noting that both Bouvar and Bond share the same initials, she explains that Colonel Bouvar passed away in his sleep. Bond laments that he did not have the opportunity to kill the SPECTRE operative personally, stating that he had murdered two of his colleagues.

As the two of them stand on the balcony outside the chapel, Bond observes Bouvar's widow behaving suspiciously. As Bond makes to leave, Mademoiselle La Porte inquires if there is anything else the "French station can do for Monsieur Bond?". Bond quips "Later, perhaps." and they hurry away.

It is revealed that in an attempt to evade reprisals, Colonel Bouvar faked his death and disguised himself as his own widow. Bond surprises him at his French chateau, where a fight ensues and ends with Bond breaking Bouvar's neck with a fire poker.

Chased by Bouvar's bodyguards, Bond dons a Bell Rocket Belt jet-pack and escapes by making a short flight from the roof of the château to his Aston Martin DB5 parked nearby. Mlle. La Porte is waiting for him and helps him bundle the jet-pack into the car's trunk. Bond then uses the car's bullet shield and water cannons to ward off the approaching bodyguards and as the scene fades into the film's title credits the pair drive away. 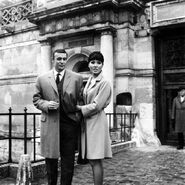