The Moonraker laser rifle was a fictional directed-energy weapon designed primarily for space warfare. It was first featured in the 1979 James Bond film, Moonraker, and subsequently appeared in the video-games GoldenEye 007 (1997), its 2010 remake and 007 Legends (2012).

The prop laser weapons were dressed-up IMI Uzi replicas, apparently store-bought plastic toys. These toy Uzis were also used in quite a few Sci-fi and 'action' B movies during the late 1970s and early 1980s. The guard of Drax's space station are also armed with smaller laser pistols.

The Moonraker Laser made its first video-game appearance in 1995's GoldenEye 007 for the Nintendo 64, under the name "Military Laser". In the game it is a very powerful weapon, comparable to the Cougar Magnum but with a much higher rate of fire and no magazine or ammunition limitations.

The rifle can normally only be found in the "Aztec" map, but two cheats exist specifically to give Bond this weapon in every mission. It has been noted that the laser was much more common in pre-release versions of the game, appearing in several maps - "Facility", "Bunker 1", and "Silo". It was probably only used for testing and never intended to actually appear in those missions.

The weapon made its second appearance in the "00 Edition" of Goldeneye 007: Reloaded (2010) on Playstation 3. When purchased, the player received a redeemable code for an extra multiplayer character and the Moonraker Laser, also for multiplayer use.

Developed by the same team behind 2010's GoldenEye remake, the Moonraker laser rifle appeared in the 2012 video game 007 Legends during its fifth level based on Moonraker and the game's multiplayer mode. Two types of laser rifle are available: the "standard" model and the "MK 2" rifle; both of which are equipped with an unlimited supply of ammunition. 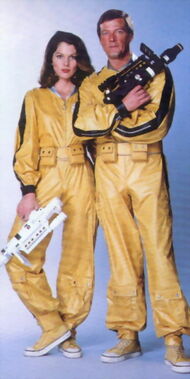 Retrieved from "https://jamesbond.fandom.com/wiki/Moonraker_laser_rifle?oldid=88956"
Community content is available under CC-BY-SA unless otherwise noted.