watch 01:45
The Loop (Movies)
Do you like this video?
Play Sound
For the space shuttle featured in the 1979 film, see Moonraker (Space Shuttle).

The Moonraker was a fictional ballistic missile designed and constructed by post-war millionaire Sir Hugo Drax, ostensibly for the British government. In reality Drax planned to launch the rocket and its atomic warhead into the heart of London. The weapon was featured in, and lends its name to, Ian Fleming's third James Bond novel, Moonraker (1955). While the weapon has remained unadapted by the EON Productions series of 007 films, it was featured in the BBC's 2018 radio drama adaptation of Fleming's novel.[1]

Essentially, the Moonraker rocket is an upgraded German V-2 rocket using liquid hydrogen and fluorine as propellants. It can withstand the ultra-high combustion temperatures in its engine thanks to the use of columbite, which Drax has a monopoly. Therefore, because the rocket's engine can withstand higher heat, the Moonraker can use more powerful fuels, greatly expanding its effective range.

The rocket was constructed at Drax's Romney Marsh facility on the southern coast of England. The project was overseen by Russian scientist Dr. Walter and an all German crew of scientists. During the course of the novel James Bond investigated Drax's operation and he discovered Drax was in fact a Nazi planning to use the rocket to destroy London; equipping it with an atomic warhead. Drax captures Bond along with his secretary Gala Brand, in actuality an undercover policewoman, and places both of them underneath the rocket as it is preparing to launch in hopes that the rocket will incinerate both spies. Before the Moonraker is launched, Bond and Gala escape. Gala gives Bond the proper coordinates to reprogram the gyros and send the Moonraker into the sea. Drax and his henchman attempt to escape in a Russian submarine, but are killed because of their own deceptions, as the Moonraker has now been fired to the very location they are fleeing to. 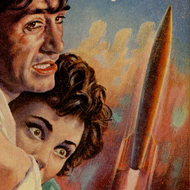 The Moonraker rocket, as depicted on the cover of the Pan paperback edition of Moonraker (1959). 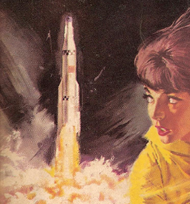 The Moonraker rocket, as depicted on the cover of Pan's 1962 paperback edition of Moonraker (1962).
Add a photo to this gallery

Retrieved from "https://jamesbond.fandom.com/wiki/Moonraker_rocket?oldid=79386"
Community content is available under CC-BY-SA unless otherwise noted.