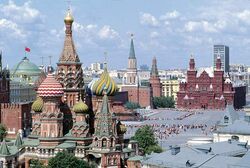 Moscow is the capital city and the most populous federal subject of Russia, and formerly, the Soviet Union. It was featured in the James Bond novels From Russia with Love, The Man with the Golden Gun and The Man from Barbarossa and seen in several Bond films including The Spy Who Loved Me, Moonraker, For Your Eyes Only and Octopussy.

Retrieved from "https://jamesbond.fandom.com/wiki/Moscow?oldid=37212"
Community content is available under CC-BY-SA unless otherwise noted.