Deceased; consumed by barracuda and sharks

From Russia with Love (novel) (mentioned only)

Mr. Big is the alias of the main villain in the novel Live and Let Die and its 1973 film adaptation. In the novel his real name is Buonapart Ignace Gallia. In Fleming's novel, Mr. Big is a SMERSH operative and head of the "Black Widow Voodoo Cult" and his scheme is to smuggle and launder 17th century gold coins for SMERSH.

According to M, Mr. Big is one of the most powerful criminal figures in the world. In the novel Live and Let Die, Mr. Big's name is actually an acronym for Buonapart Ignace Gallia, his real name. Big's past is shrouded in mystery, although it is known that he was born in Haiti and is half French. He served in the American military in World War II and was an exceptional soldier working alongside special services. Following the second world war, he defected to the Soviet Union and was supposedly trained in Moscow as a special agent and is a prominent member of SMERSH. He was tasked with seeding corruption within American society, making full use of any corruptions in the capitalist system.

In Haiti Mr. Big discovered a young performer girl, Simone Latrelle doing a mind-reading act in a cabaret and, recognizing the value of her abilities, took her into his employ, using her in his espionage operations. Eventually he even planned for her to bear his children. Taking the name Solitaire, she virtually becomes his hostage, with basically no personal autonomy.

Publicly, Big owns a nightclub in Harlem named "The Boneyard" and a company based in St. Petersburg, Florida named Ouroborous Inc. which deals in tropical fish and rare shells. In reality, the company is a front for laundering 17th century gold coins for SMERSH. Big is also head of the "Black Widow Voodoo Cult". He is believed by some to be the voodoo master Baron Samedi himself; a reputation which Big has carefully cultivated to inspire fear and respect.

Mr. Big, using his yacht, the Secatur, smuggles 17th century gold coins from Bloody Morgan's cove in Jamaica to Saint Petersburg, Florida. The coins are then held in a warehouse owned by Mr. Big's henchman, The Robber. In seemingly innocent fish tanks, the gold coins are hidden under the dirt and guarded by deadly fish. They are then trickled out into the market. All of this is done in an effort to finance operations by SMERSH.

Her Majesty's Government unleashes James Bond on Mr. Big after the events of the novel Casino Royale, allowing Bond to exact his revenge on the SMERSH organization. Bond travels to New York and is interrogated by Mr. Big and Solitaire inside his club and Mr. Big breaks one of his little fingers whilst Felix Leiter is fed to a shark. Leiter survives but has an arm and leg amputated.

Big's demise comes in Jamaica after Bond, Quarrel and John Strangways find Mr. Big's hideout in a coastal cave. Bond places an explosive on Big's yacht in the cave. He sinks it when it was doing a smuggle run. Although Mr. Big actually survives the explosion, he is killed moments later by the swarm of barracuda and sharks that not only devour him, but his remaining henchmen as well. 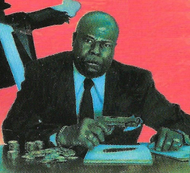 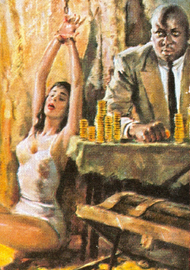 Mr. Big with a captured Solitaire.
Add a photo to this gallery

Retrieved from "https://jamesbond.fandom.com/wiki/Mr._Big_(Literary)?oldid=86434"
Community content is available under CC-BY-SA unless otherwise noted.