Granite fingernails on his thumbs

Deceased, taken off train by chains

Mr. Hinx is a fictional assassin working for the terrorist organisation, SPECTRE, and is featured as the main henchman and the tertiary antagonist of the 2015 James Bond film Spectre. He is portrayed by American actor and former professional WWE wrestler Dave Bautista.

Mr. Hinx is an intelligent and brutal assassin, a high-ranking member of the SPECTRE organisation and associated with Ernst Stavro Blofeld during the film. This henchman is incredibly strong and also tremendously durable, capable of smashing through walls and enduring huge amounts of physical pain completely effortlessly. He is also very capable in a fight, nearly killing James Bond in Morocco. His signature weapon of choice is a double-barrelled AF2011A1 Dueller Prismatic which fires .45 calibre rounds.

Hinx is first present at the SPECTRE meeting at the Palazzo Cadenza in Rome. After Guerra volunteers to take over Marco Sciarra's mission to assassinate the Pale King (aka. Mr. White), Moreau asks if there are any challengers for Guerra's position. Mr. Hinx quietly enters the conference room and stands silently alongside Guerra. Asked why he is qualified to 'succeed' Guerra, Hinx promptly smashes Guerra's head on the meeting table, gouges his eyes with his thumbs, and breaks his neck, killing him. Hinx then throws his corpse aside and takes the vacant seat after using a handkerchief to wipe his metal thumb nails. Observing the meeting, Bond's cover is blown and he escapes from the building in his Aston Martin DB10, pursued by Hinx in his own personal sport car, a Jaguar C-X75. Bond evades the assassin by dousing the hood of his Jaguar with flame, and ejecting from the Aston Martin just before it plunges into the Tiber river.

The henchman subsequently arrives at Mr. White's shack in Altausee, Austria to find that he has committed suicide. Looking around, he spies White's surveillance system and utilises footage of his meeting with 007 to discover the location of White's daughter, Madeleine Swann. Abducting Swann from the Hoffler Klinik, Hinx and his jeep convoy are pursued by 007, in an aircraft. His battle-damaged plane stripped to its fuselage and engines, Bond attempts to collide with Hinx; whose vehicle goes off course and crashes into a nearby house, apparently killing him. However, he is revealed to be merely unconscious, and later intercepts 007 and Swann on a train crossing North Africa.

He ambushes the pair as they dine, knocking Swann unconscious with a backhanded-blow. Hinx and 007 brawl through the carriage, with 007 attempting unsuccessfully to defeat the hulking assassin by attacking him with a knife, a tray, a crate and a wine bottle. Eventually Hinx's sheer strength overpowers Bond and he prepares to throw him out of the train. Bond is saved by Swann, who shoots Hinx in the shoulder. Her pistol clicks empty and Hinx starts to strangle her. Bond rescues her, attaching Hinx to a series of heavy barrels by a long chain. One by one, the barrels fall off, and with just enough time to realize his fate, Hinx utters the expletive "Shit" - his only spoken line in the film - before he is brutally yanked out of the speeding train by the final barrel, snapping his neck and killing him.

"When I came over to meet Sam [Mendes], I only asked two questions. I asked him if Mr. Hinx was a badass. He said, 'Yes, he's a badass.' I said, 'Well, is Mr. Hinx intelligent?' He said, 'Very.' That's what I like about Mr. Hinx. He's very well-dressed and very well-mannered. I'm not just here to fight people. He has a sense of humour. He definitely knows what a metaphor is."
― Dave Bautista.[2] 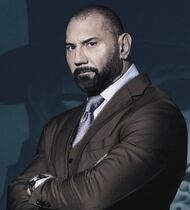 Hinx arrives at the SPECTRE meeting 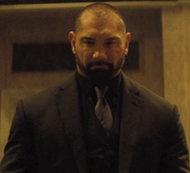 Hinx during his last fight with Bond

Hinx fights Bond in the train

Hinx saying "Shit" before his death