Deceased; burned alive/killed by impact with water from a height

Mr. Kidd and his associate Mr. Wint are a pair of assassins in the employ of Ernst Stavro Blofeld. Loosely based on the literary character who first appeared in the 1956 Ian Fleming novel Diamonds are Forever, he was portrayed by Putter Smith and doubled by stuntman George Leech[2] in the 1971 film, Diamonds are Forever.

Circa 1971[1], Mr. Kidd and his partner Mr. Wint are assassins working for Ernst Stavro Blofeld. Their assignment is to kill everyone in the diamond-smuggling "pipeline" running from South Africa to the United States via The Netherlands. The pair takes a sadistic pleasure in their work — for example, Kidd photographs the body of Mrs. Whistler and jokes about sending the pictures to the primary-age children to whom she was a school teacher. This is typical of an overtly morbid sense of humour they share, completing each other's sentences as a game and delighting in competing over laboured, blackly humorous puns.

Several scenes in the film very strongly suggest that they are engaged in a homosexual relationship: for instance, the two are seen arm-in-arm in an affectionate pose on two occasions (the first time they are holding hands in the desert after the scorpion attack and the helicopter explosion). Mr. Wint also has a habit of spraying himself with women's perfume, shown prominently in several scenes of the film. Finally, when the two are on the same flight as smuggler and Bond girl Tiffany Case, Mr. Kidd notes that she is "quite attractive"; Mr. Wint glares at him, prompting Mr. Kidd to qualify his comment with "for a lady."

"Curious... how everyone who touches those diamonds seems to die."
― Mr. Wint to Mr. Kidd[src]

The two use numerous methods of killing their targets (or trying to), some highly creative. Starting at the beginning of the pipeline, Wint and Kidd murder a South African dentist by placing a scorpion down the back of his shirt. Shortly after, the dentist’s contact arrives and they blow up his helicopter with a bomb. Next, they deliver the diamond package to school teacher Mrs. Whistler, who they shadow to Amsterdam and subsequently drown in the Amstel River. Boarding a plane for Los Angeles, they follow James Bond (who they assume to be smuggler Peter Franks) to a crematorium and attempt to kill him by sealing him in a coffin bound for a furnace. Believing that Franks is dead, they murder the next link in the chain, stand-up comedian Shady Tree.

The following day the pair visit the home of Tiffany Case - the last link to be murdered - only to find Plenty O'Toole. Believing her to be Case, they tie her feet to a concrete block and throw her into a swimming pool. Later that evening the duo are given a second chance to kill Bond when Blofeld's gas-venting elevator renders the spy unconscious. Driving him into the middle of the Las Vegas desert, they bury Bond alive by putting him into a length of pipeline which is due to be buried. However, their taste for plotting overly elaborate deaths allows Bond to escape.

If at first you don't succeed...

"The wine is quite excellent. Although for such a grand meal I would have expected a claret."
"But of course. Unfortunately our cellar is poorly stocked with clarets."
"Mouton Rothschild is a claret. And, I've smelled that aftershave before, and both times - I've smelled a rat."
― James Bond and Mr. Wint[src]

After Bond foils Blofeld's plot, he and Case depart from Los Angeles aboard the Canberra. Unbeknownst to the couple, Wint and Kidd have also boarded the cruise liner intent on killing the spy. They pose as stewards in the couple's suite, serving them a romantic dinner complete with dessert - La Bombe Surprise. However, Bond is quick to suspect that something is wrong. He exposes Wint's ignorance of the wine he serves him at dinner and links the smell of his cologne to his prior misadventures.

Realizing that Bond has blown their cover, the pair immediately turn against him. Mr. Kidd ignites the kebabs he is holding in both hands, aiming to torture Bond to death while Mr. Wint strangles him with a chain. Bond first neutralizes Mr. Kidd by splashing Courvoisier over the flaming skewers, setting Kidd on fire. Within seconds, he is burning uncontrollably, and in desperation jumps overboard from the very high deck of the ship, where he is presumably killed from the impact. As Wint continues to strangle 007, Case throws the dessert at the assassin; she misses, and the dessert turns out to be concealing a bomb. Bond gains the upper hand against Mr. Wint, pulling his arms between his legs and tying his hands and the bomb together with his coattails. Bond then flips Mr. Wint overboard, and the bomb explodes while he is falling toward the water, killing him.

Mr. Wint and Mr. Kidd are a pair of severely disturbed assassins for hire with warped minds. They never work separately. On the outside both Wint and Kidd seems to be polite and courteous, often more so than their victims, but with a hint of sarcasm. In reality, their politeness is but a coldly orchestrated persona to lure their victims into a sense of safety. Both are cold sadistic murderers and regularly invent new and horrible ways to kill people on the fly. They are very fond of arranging death traps for worthy victims (such as James Bond). The deadly duo seems to be a couple. Wint is apparently the jealous type and does not appreciate it when Kidd compliments somebody on their looks, be it a man or woman. They have some sort of bantering pun dialogue going on with one-liners about their victims, and often complete each others’ sentences. Afterwards, they enjoy laughing about others grim fate; they really are a pair of callous sadists. They have been known to work with several different criminal organizations around the world. They likely have a reputation as dependable hitmen, and stand ready to work for the highest bidder.

Jazz musician Putter Smith was invited by Harry Saltzman to play Mr. Kidd after a Thelonious Monk Band show. Musician Paul Williams was originally cast as Mr. Wint, but when he couldn't agree with the producers on compensation, Bruce Glover replaced him. Glover said he was surprised at being chosen, because at first producers said he was too normal and that they wanted a deformed, Peter Lorre-like actor.[3]

When Mr. Kidd burns during his death, he was played by stuntman George Leech. 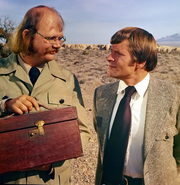