The Museum Guide was a fictional unnamed tour guide in the Venini Glass Museum and one of Hugo Drax's eugenics specimens. The character appeared in the 1979 James Bond film Moonraker and was portrayed by American actress Anne Lonnberg.

The Museum Guide is one of the many henchwoman working for Hugo Drax's evil plan. She is a museum guide at the museum Bond goes to and reacts nervously once she sees him. In her duties as a docent, she told a tour group about an expensive porcelain bowl and then momentarily activated an invisible radar alarm by attempting to touch the bowl, showing what happens to those who think the bowl is unguarded. The bowl was later destroyed by Bond, or more accurately by Chang, who attempted to kill Bond in the museum.

She is also present when the girls attempt to kill Bond with an anaconda. It was not confirmed if she was one of the beautiful people Drax selected for his mission to be impregnated from the "space heaven" in an attempt to wipe out Earth's population and replace it with his master race. Her final fate is unknown, though it is assumed that she is killed in some manner during the final battle. 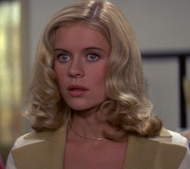 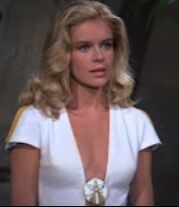 Retrieved from "https://jamesbond.fandom.com/wiki/Museum_Guide?oldid=88967"
Community content is available under CC-BY-SA unless otherwise noted.