Deceased, blown up in helicopter by Bond

The Spy Who Loved Me (film)
Naomi is the fictional helicopter pilot/assistant to shipping magnate Karl Stromberg and the tertiary antagonist of the 1977 James Bond film The Spy Who Loved Me. She was played by British actress Caroline Munro.

Naomi is Karl Stromberg's glamorous, sexy and seductive helicopter pilot, personal assistant and trusted subordinate, based at Atlantis, working to suit his every command. The young beautiful brunette is first introduced escorting Dr. Bechmann and Professor Markovitz into the Atlantis dining room to meet Stromberg, before exiting, leaving the three men to discuss business.

Later, when James Bond and KGB agent Major Anya Amasova are dispatched to Sardinia, posing as marine biologists, Naomi arrives by boat at their hotel wearing nothing more than a bikini, high heels, a transparent coat and a pair of sunglasses, raising eyebrows from both Bond and his accomplice for very different reasons. Greeting the pair in a friendly manner, Naomi introduces herself, telling both Bond and Anya (under aliases) that she is to collect them and take them to Atlantis to meet Stromberg personally. When Bond offers Naomi a drink, she politely declines informing the him that Stromberg is a very busy man and that they should make tracks. Upon watching Naomi head over towards the boat, Bond comments on Naomi's figure, making Anya jealous and bitter of their host.

During the boat journey to Atlantis, Bond and Naomi playfully flirt with one another, enraging Anya even more. Arriving at the base, Bond decides to meet Stromberg alone, asking Naomi to stay with his "wife", showing her around the base which she agrees too. Before he departs, Naomi manages to tell Bond a little more about Stromberg.

After his uncomfortable meeting with Stromberg, Bond finds Naomi and Anya beside a model of the Liparus, the latest addition to the Stromberg fleet. Naomi continues to demonstrate her vast knowledge, trying to impress Bond, but Anya proves her wrong on her fact about the ship being the largest carrier in the world, much to Naomi's frustration. Meanwhile, Stromberg, knowing the true identities of Bond and Anya orders Jaws to kill them once ashore.

While driving along Sardinia's coastal roads, several attempts are made to kill Bond and Anya. There is a failed attempt by the motorcycle assassin, followed by Jaws and his henchmen trying to machine gun then from another car. After Jaws' car runs off the road and crashes, a helicopter appears, chasing the car. As the helicopter comes from behind the cliff, it tries to gun down Bond's Lotus Esprit. After a short while, it flies alongside the car, where to Bond's surprise, he sees Naomi piloting it; much to a look of resentment from Anya. Bond nods at her, and Naomi responds with a sultry wink, a wave and begins shooting once again.

In a game of cat and mouse, Naomi chases Bond across the highways of Sardinia until he comes to a port which he immediately drives off into the water. Naomi hovers overhead and smiles, believing she's won. Unbeknownst to her, however, the Lotus is a submersible, meaning she's unable to see it when she's trying to look into the sea. Taking aim, Bond assures Anya it's time to "say goodbye to an uninvited guest" before firing a surface-to-air missile that blows Naomi out of the sky.

Naomi greets Bond at his hotel

Naomi informing Bond and Anya of the Liparus

Naomi realizing Bond is not into her, much to her frustration and to Ana's satisfaction

Naomi attacking Bond and Anya in her helicopter

Naomi chasing Bond off a port

Naomi being blasted out the sky by Bond's Lotus 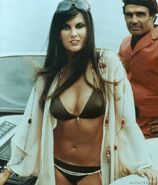 Naomi on her employer's boat

Add a photo to this gallery
Retrieved from "https://jamesbond.fandom.com/wiki/Naomi?oldid=101277"
Community content is available under CC-BY-SA unless otherwise noted.