Nikolai Diavolo is a fictional former KGB agent and Russian industrialist who attempted to overthrow the established world order. The main antagonist of the 2004 James Bond video game Everything or Nothing, the character is portrayed by actor Willem Dafoe.

Nikolai Diavolo is a former KGB intelligence operative, one so ruthless that the KGB itself tried at one point to have him terminated, and failed. His control and mentor in the KGB was James Bond's old nemesis Max Zorin. Disillusioned by the westernisation of his homeland, he would develop a scheme to gain control of Russia and subsequently the world; during which he would have the opportunity to exact revenge against 007 for the death of his mentor.

As part of his scheme, he partners with Dr. Katya Nadanova, who provides him with nanobot technology originally designed for repairing nuclear reactors. Diavolo then enlists the help of Arkady Yayakov to weaponize the nanotechnology - changing them from peaceful service machines into weapons of mass destruction; capable of eating through any kind of metal (with the exception of platinum). Using his platinum mine in Puerto Viejo, Peru, Diavolo hoards the precious metal in order to construct an army of armed vehicles immune to his own nanotech weaponry. While investigating Diavolo's activities, British agent 003 is caught, interrogated and eventually killed by him, in front of James Bond. 007 leaves the country, and Diavolo gets word that someone working for Yayakov is a double agent. The threat is dealt with, or so they think. Eventually, Bond returns to Peru and enters one of Diavolo's famous Automobile races, the winner of which gets a private audience with him. Naturally, 007 succeeds and meets with Diavolo; however, he is aware of the spy's identity and tries to have him killed. Bond escapes the ambush and makes his way to Diavolo's platinum mine, uncovering his scheme. While there, he is sedated by Nadanova and taken captive.

Diavolo orders for Bond to be dealt with and he heads to Moscow to take over Russia with his army of Platinum tanks. Diavolo plans to do this by launching some long-since decommissioned missiles with their missing warheads replaced with Nanotech payloads. Bond is able to infiltrate the facility, and deactivate the missiles: causing Diavolo to try to flee with Katya in a Russian hoverjet. Bond shoots the plane down, but Diavolo ejects just in time. Diavolo makes his way to the surface, where he reactivates one of the missiles using a telemetry tower and aims it at London. Bond then destabilises the tower, causing Diavolo to plunge into the fiery missile silo below. 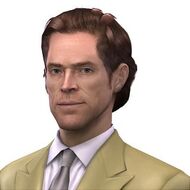 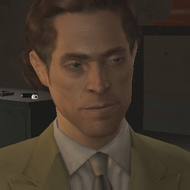 Diavolo with Katya Nadanova and Jaws in their armour suits.
Add a photo to this gallery
Retrieved from "https://jamesbond.fandom.com/wiki/Nikolai_Diavolo?oldid=85501"
Community content is available under CC-BY-SA unless otherwise noted.