"And you are James Bond. 007, licensed to kill. Am I to be your target for tonight?"
― Octopussy's first encounter with James Bond.[src]

Octopussy is a fictional wealthy businesswoman and jewel smuggler leading the Octopus Cult. A primary Bond girl but also a secondary antagonist portrayed by Swedish actress, Maud Adams, she appeared in the 1983 James Bond film, Octopussy, and was also seen in the 1986 James Bond 007 tabletop role-playing game.

The character of Octopussy was created for the 1983 film adaption of Ian Fleming's short story. In the Fleming story, Octopussy, Octopussy was the name of the pet octopus that Major Dexter Smythe loved. The role of Octopussy was heavily symbolic and, towards the end of the film, a key element in the story.

Octopussy is a jewel smuggler who lives a life of luxury and works alongside with exiled Afghan prince, Kamal Khan and corrupt Soviet military officer, General Orlov. Octopussy's father, Dexter Smythe studied octopi, thus; the nickname "Octopussy". Her favourite octopus is the Blue Ringed Octopus which she keeps as a pet and which has enough venom to kill up to 50 people. Octopussy owns her island, the "floating palace" in which she lives with many beautiful women, including her second-in command, Magda, who are members of her Octopus Cult. She is also an extremely successful businesswoman who owns many legitimate enterprises in shipping, hotels, carnivals and circuses. Together with Magda and Kamal she tries to get a fake Fabergé egg for General Orlov, and participate in what she thinks is a jewelry contraband, switching the real items for fakes and moving them through her circus.

Octopussy is first seen when Khan shows her the egg. Her face is not seen as Khan tells her about Bond. He insists on killing Bond but Octopussy says not to. The back of her head is also seen briefly when she is seen skinny dipping and exiting the pool when Bond infiltrates her floating palace using the crocodile disguise and he sees her whilst hiding.

When Octopussy meets Bond, she reveals that she feels indebted to him; her british father was a traitor that Bond exposed; she wished to meet Bond to thank him for delaying the arrest of her father; long enough for him to save face by committing suicide before he could be arrested and convicted. Octopussy declares Bond her ally in front of Khan and after unsuccessfully trying to bribe him, the two make love in the evening. The following night, they defend her palace against assailants. During the fight Bond fakes his death and leaves for Karl-Marx-Stadt, having discovered that Octopussy's circus will perform there, and learning the mercenaries who attacked the palace to be Khan's men.

Octopussy, along with Orlov and Kamal Khan, schemes to smuggle the originals of the faked jewelry from East Germany to Switzerland using her circus. Orlov and Khan, however, would use the contraband as a disguise for detonating a nuclear bomb inside a US airbase on their route through West Germany, provoking a mass disarmament of the United Nations. Bond follows her to the circus and tries desperately to stop the bomb which Octopussy is unaware of. When he tells Magda and Octopussy who he is (disguised in a clown suit), and that they had been betrayed by Orlov and Khan, Octopussy grabs a gun and shoots off the lock on the case holding the bomb. With seconds to spare Bond disarms the bomb.

Back in India, Octopussy's group raids Khan's palace to get revenge for Khan's betrayal, but she is kidnapped and knocked unconscious by Gobinda. She wakes up in Khan's private plane and as she sees Gobinda go out to kill Bond she slaps him but gets knocked back into her seat. After Khan loses control of the plane, Bond saves Octopussy and jumps out leaving Khan to crash but Octopussy nearly falls off the cliff, but she is saved again by Bond. They make love in the end on board Octopussy's boat during his recuperation.

Octopussy sends Kamal Khan to acquire Fabergé's egg with the aim of making it the last attraction in his circus but is unaware that General Orlov replaced the object with a counterfeit containing a miniature neutron bomb. The corrupt military planned to detonate the device during a circus performance in Belgrade in the hope of destabilizing NATO (he intends to "prove" that the bomb is American, which would help him to convince his superiors to invade Europe). As in the film, Bond is brought in to investigate the Russians' intentions with the Egg and the rest of the mission reflects the events of the feature film.

Actress Barbara Carrera was considered for the role of Octopussy but she refused it for portraying assassin Fatima Blush in Never Say Never Again, the film opposing Octopussy. Actresses Faye Dunaway, Sybil Danning, Persis Khambatta, Susie Coelho and Barbara Parkins also auditioned for the role. Dunaway was deemed too expensive while Danning lost to Maud Adams. Ironically, Parkins had appeared with Roger Moore in the 1977 film Word of a Man. 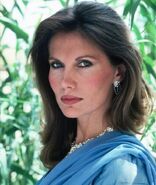 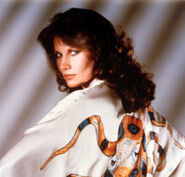 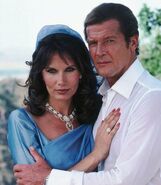 Octopussy defenses herself from Khan's men.

Octopussy seduces Bond on her boat.