Oddjob is a fictional Korean bodyguard and enforcer employed by wealthy bullion dealer and criminal, Auric Goldfinger. A secondary antagonist portrayed by late American wrestler and actor, Harold Sakata, the character appeared in the 1964 James Bond film Goldfinger and was adapted from the literary character who first appeared in Ian Fleming's 1959 novel. Sakata's Oddjob has subsequently appeared in numerous video-games, most notably GoldenEye 007 (1997), James Bond 007 (1998), GoldenEye: Rogue Agent (2004) and 007 Legends (2012).

After catching Auric Goldfinger cheating at gin rummy, James Bond foils his scam by seducing his assistant, Jill Masterson, and blackmailing Goldfinger into losing a game. In reprisal, the bullion dealer's Korean manservant Oddjob knocks out Bond in his Miami hotel suite and murders Jill. When Bond regains consciousness, he finds Jill dead, covered in gold paint, having died from "skin suffocation."

Returning to Britain, Bond is briefed on Goldfinger's smuggling pipeline and arranges to meet him socially at a country club. The pair play a high-stakes golf game with a recovered Nazi gold bar at stake. Oddjob acts as Goldfinger's golf caddy. When Goldfinger overshoots a hole, his ball lands in the rough. Oddjob, acting as Goldfinger's caddy, appears at first not to know much of the game, standing on the green edge while the others are pinpointing the ball's location. Bond's caddy is quietly told by Bond that he has found Goldfinger's ball and this will serve as a test of honesty. Oddjob helps his master cheat by surreptiously dropping a duplicate ball from his trouser leg. Bond outmanoeuvres Goldfinger and wins the game. Frustrated and highly suspicious of the agent's motivations, Goldfinger warns Bond to stay out of his affairs by having Oddjob demonstrate his razor-rimmed throwing hat on one of the club's marble statues. As they depart, Bond hands back the lost golf ball, which Oddjob promptly crushes with his bare hands.

Oddjob accompanies Goldfinger and his gold-smuggling Rolls-Royce Phantom III on-board a flight to Geneva, Switzerland and chauffeurs the metallurgist to his Swiss smelting plant, Auric Enterprises. There, they disassemble the vehicle and melt down the gold components that he has smuggled around Europe. While spying on Goldfinger's operation, Bond encounters Tilly, Jill Masterson's sister, as she tries to avenge her sister by killing Goldfinger. However, the pair trip an alarm in the process and a vehicular chase ensues. The chase ends in a dead end and as Tilly attempts to flee into the forest Oddjob kills her with his hat before briefly capturing Bond. The British tries to escape, but is then captured again after a car chase through the compound. However, Goldfinger decides to spare 007 for the moment after being duped by the latter to believe that he knows about Operation Grand Slam.

Oddjob travels with Goldfinger to his stud ranch in Kentucky, United States, where it is revealed that Operation Grand Slam involves destroying Fort Knox and its supply of gold so that the value of Goldfinger's gold will increase many times to become the most richest man in the world. It also turns out that Oddjob himself is involved of it as he kills Mr. Solo after the gangster refuses to be a part of Goldfinger's scheme to attack Fort Knox. He then drives the car containing the corpse to a junkyard and presses it into a cube, destroying the evidence.

Believing the US military forces to be neutralised by an airborne nerve gas, Goldfinger's private army breaks into Fort Knox and accesses the vault itself as he arrives in a helicopter with a Chinese atomic device to irradiate the gold reserve. Oddjob accompanies Bond into the vault and handcuffs the spy to the device. As a gunfight erupts outside, Goldfinger locks Bond, Oddjob and Kisch in the vault. Realizing that they have been betrayed by their boss, Kisch desperately runs to disarm the bomb to save himself and Oddjob, but is thrown to his death by the ever-loyal henchman, ensuring that Goldfinger's plan must succeed, even at the cost of his own life. Several floors below, Bond takes the keys from Kisch's corpse and extricates himself from the handcuffs. Oddjob throws his hat, but misses and severs an electricity cable. Even without his hat Oddjob proves to be a formidable opponent in combat; not flinching as Bond hits him with a block of wood and even a gold ingot. Possessing almost superhuman strength and physique, he casually throws 007 around the vault, until the spy gets ahold of his hat. He throws it, but Oddjob calmly ducks and it wedges between two metal bars. The Korean rushes to retrieve it but, when he puts his hand on the steel rim of the hat, Bond grabs the severed electrical cable and electrifies the bars; electrocuting Oddjob to his painful death.

Oddjob's strange behavior was emphasized by his squat. Oddjob was always dressed in black stripes and always wore a black cylinder. He was never heard to speak, likely because he did not speak English, although he seemed to understand English. Goldfinger could be assured that each of its orders was executed immediately. His previous career is as unknown as the circumstances that brought him to Goldfinger's service. The two inequalities formed a strange but dangerous duet. None of the two respected people lived in the least. While Goldfinger acted for personal reasons, Oddjob seemed almost obsessed with unconditionally satisfying his master. Thus, unlike his other henchmen like Kisch, he was even ready to die for the success of Operation Grand Slam for him. His most unusual and deadly weapon was his bowler hat, with a blade hidden in the brim. He used it with deadly effect.

Testament to the character's popularity, Oddjob has frequently made appearances in James Bond video games as an adversary or a playable multiplayer character. In James Bond: The Duel for the Sega Genesis/Megadrive, Oddjob (or rather, a clone of Oddjob) makes an appearance as a boss character in the villain's volcanic base (Stage 4). As with the film character, he uses his hat as a weapon.

In the Game Boy game James Bond 007, Oddjob appears multiple times as a henchman for the game's main villain, General Golgov. The first time is when Bond encounters Oddjob at his hotel room in Maccarech. The two fight, and Bond is defeated and left stranded in a desert. Later on, Bond trails Oddjob to Tibet, only to be captured. Bond escapes confinement and obtains a shield to protect him from Oddjob's hats, which he uses to deflect back at him. Notably, in this game Oddjob actually speaks.

Oddjob later appeared in the 2004 spin-off Bond game, GoldenEye: Rogue Agent. Set in an alternate timeline in the criminal underworld of the 007 universe, Oddjob continues to be employed by Auric Goldfinger as his manservant. He participates in the underworld feud between Dr. Julius No and Goldfinger, protecting his master and their recently developed super-weapon (the OMEN) during No's assault Auric Enterprises' alpine facility. His initial plan a failure, Dr. No launches an attack on Goldfinger's Midas casino in Las Vegas, again hoping to procure the OMEN, which had recently been locked away in its subterranean vault. Oddjob primes the OMEN for firing, before being airlifted to safety by Pussy Galore. The weapon was subsequently utilized by Goldfinger's golden-eyed enforcer to rid the building of Dr. No's forces. From there, Galore takes the Oddjob and GoldenEye to Dr. No's staging area at the Hoover Dam. They manage to bypass the security forces and detonate Dr. No's seismic bomb; causing the dam to disintegrate. Almost immediately afterwards Oddjob inexplicably betrays and attacks GoldenEye. As he rushes at the enforcer, he is thrown over a guard rail into the pit.

His latest appearence is in the game is 007 Legends, when James gets a flashback. He appears by throwing his hat at him where he has to escape by jumping on a display plane. After that, he is seen strangling a friend and after that he has to duel him.

Oddjob has also appeared in a number of games as a playable multiplayer character (in the likeness of Harold Sakata). He was notable in GoldenEye 007 (Nintendo N64) for being the shortest playable character (and thus hardest to hit) and became one of the more popular selections by players. This led to the classic "No Oddjob" rule, where the phrase must be spoken before Oddjob is chosen as a character. In the game 007: Nightfire, he can use his hat as a unique throwing weapon that returns after 30 seconds. Oddjob is also a playable multiplayer character in GoldenEye 007, the 2010 remake of 1997's GoldenEye for the Nintendo N64. In the game, he possess 2 hats in place of grenades. Once the hats are thrown Oddjob cannot retrieve them, but if they strike an enemy they are an instant kill.

Oddjob throwing his bowler hat at the statue. 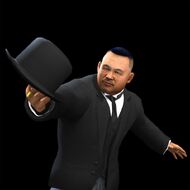