Oddjob was the fictional Korean manservant and enforcer of Auric Goldfinger. The character was first introduced in Ian Fleming's 1959 James Bond novel, Goldfinger and was subsequently adapted for comics, film, television and games. The literary Oddjob was subsequently referenced in Anthony Horowitz' 2015 continuation novel Trigger Mortis.

Oddjob, so named by Goldfinger, is Korean-born, and, much like in the film, is extremely strong, proven in one instance where he breaks the railing of a staircase with his hand and the mantel of a fireplace with his foot. Expert at unarmed combat, Oddjob is also expert with a bow and arrow, and with his metal bowler hat. He is a ruthless killer, but also acts as Goldfinger's personal guard, driver, and manservant (though not his golf caddy). He has a taste for cats as food, apparently acquired in Korea when food was in short supply (Bond frames Goldfinger's yellow cat for destruction of surveillance film, and as punishment, sees the cat given to Oddjob for dinner). He is killed when James Bond uses a knife to shatter the window next to his seat on an airplane, which depressurizes the plane and sucks Oddjob out of the window, a fate transferred to Auric Goldfinger in the film version. 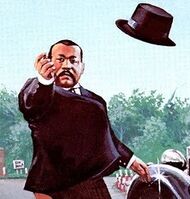 Retrieved from "https://jamesbond.fandom.com/wiki/Oddjob_(Literary)?oldid=81468"
Community content is available under CC-BY-SA unless otherwise noted.