Olga Kurylenko (born November 14, 1979) is a Ukrainian model and actress. She is best known for playing the Bond girl Camille Montes in the 22nd James Bond movie Quantum of Solace.

She was born in Berdyansk, Ukraine on November 14, 1979 to a Belarusian mother and Ukranian father.[1] When Olga was three years old her parents divorced. She was raised by her mother and did not have any contact with her father until she was thirteen years old.[2] Olga Kurylenko moved to Paris when she was 16 for her career.[3]

She has been married and divorced twice: first to the French fashion photographer Cedric Van Mol from 2000-2004[4][5] and then to mobile phone accessory entrepreneur Damian Gabriel Neufeld, whom she divorced in late 2007.[6]

She was discovered by a female model scout while on vacation in Moscow at the age of thirteen.[7] By the age of 18 she had already appeared on the covers of Vogue and Elle.[8]

In 2005 Kurylenko began her film career in France. She received the certificate of excellence award at the 2006 Brooklyn International Film Festival for her performance in L'Annulaire, and also starred in the Paris, je t'aime segment Quartier de la Madeleine opposite Elijah Wood. In 2007, Kurylenko starred in Hitman alongside Timothy Olyphant. She plays Bond girl Camille Montes in the 2008 007 film, Quantum of Solace, the 22nd film in the Bond Series.

On March 15 2020, Kurylenko was diagnosed with COVID-19. On 22 March, she said that she had completely recovered. 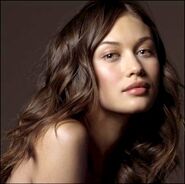 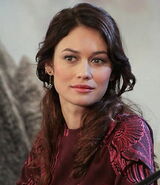 Add a photo to this gallery
Retrieved from "https://jamesbond.fandom.com/wiki/Olga_Kurylenko?oldid=96692"
Community content is available under CC-BY-SA unless otherwise noted.