Pamela "Pam" Bouvier is a fictional former United States army pilot and CIA informer. The character appears as the main Bond girl in the 1989 James Bond film Licence to Kill, portrayed by Carey Lowell and was also featured in John Gardner's accompanying novelization. Lowell later reprised the role for the 2012 video-game 007 Legends.

A former army pilot, Bouvier works as a CIA informer, posing as a courier for drug lord Franz Sanchez. James Bond first witnesses Bouvier talking to Felix Leiter at the reception of his wedding, but she leaves before Bond can speak with her.

Leiter was thrown into a shark tank by Sanchez and Bond throws Ed Killifer in the same tank, resulting in Bond being fired from MI6. After Bond steals $5 million from Milton Krest, he sneaks into Leiter's office to find he had set a meeting at a bar in Bimini, Bouvier was disappointed in seeing Bond but soon trusts him. When Dario soon comes into the bar, she asks Bond if he has a gun, after seeing his Walther PPK, she shows him a shotgun which she soon uses to blast a hole in a wall before escaping on Bond's boat. She is soon shot by Dario, but is luckily unharmed because she wore a Kevlar vest. They escape and have implied sex. She agrees to help Bond track down Sanchez, playing herself off as Bond's executive secretary while he infiltrates Sanchez's operations. At the same time, she meets Colonel Heller to set up a deal granting him immunity if Sanchez is arrested.

Bouvier, with the assistance of Q, follows Bond and Sanchez to the Olympatec Meditation Institute, where Sanchez has taken Bond. Bouvier has made her way to the OMI by disguising herself as a student, she steals a key from Professor Joe Butcher and sneaks into the distribution centre where she shoots Dario and helps destroy Sanchez's drug convoy.

After dealing with Sanchez, Bouvier and Q go to a party with Bond at the drug lord's former residence. Bouvier sees Lupe Lamora and Bond kiss. Bouvier, always jealous of Lupe, runs down the stairs to the pool. Bond sees this, Lupe insists he stay with her. Bond, not wanting to break her heart, sets her up with a date with the president Hector Lopez, he leaps off the balcony into the pool. He pulls Bouvier in the pool and they kiss.

Loosely following the plot of previous James Bond films such as Licence to Kill, the 2012 video-game 007 Legends features a mission where Bond finds his CIA agent friend Felix Leiter maimed in his house alongside his dead wife. As with the film, the man responsible is Franz Sanchez, a drug lord whom Bond and Leiter had unsuccessfully attempted to take down weeks earlier. On a quest for vengeance, Bond and DEA agent Pam Bouvier infiltrate Sanchez's facility inside an old Otomi temple, intent on killing him. Unlike the film, the video-game has Bouvier (not Bond) going undercover at the drug kingpin's distribution facility. In addition, 007 is operating under the blessing of MI6, who have sent him to expose Sanchez's ties to international terrorism. After her cover is blown, Bond rescues Bouvier and a car chase ensues; culminating in Sanchez's death. 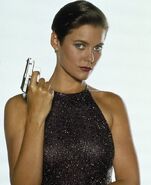 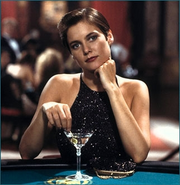 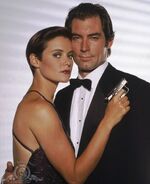