View source
watch 01:23
Wiki Targeted (Entertainment)
Do you like this video?
Play Sound

"Tell me James, do you still sleep with a gun under your pillow?"
― Paris mentioning her past relationship with James Bond[src]

Paris Carver (née McKenna) was a beautiful brunette who was once a lover of James Bond. She grew up in New York and attended university to become a teacher before leaving to become a model. One night she met Bond at a high profile cocktail party and the two started a relationship. He left her behind after two months in (ironically) Paris, however, because his job was too dangerous for a real relationship. Four years later she later met TV and news magnate Elliot Carver and they married after 3 months together.[2] Carver was leading a conspiracy to concoct a war between England and China; a war that his news divisions would have exclusive coverage of, sending his ratings into the stratosphere. MI6 sent Bond to investigate and he eventually crossed paths with Paris. M had instructed him to seduce her and learn some of Carver's plans.

When he saw her again, her beauty was not lost on him but she was not exactly pleased to see Bond and slapped him across the face the moment she turned to him, shocking the guests. They talk about 007's job and asked if he "still sleeps with a gun under your pillow?." When Bond came up in conversation with her husband, Paris lied, saying that he had dated her roommate and that she barely knew him.

After Carver had a talk with her, he had seen the security footage that Henry Gupta showed him the conversation she had with Bond.

Suspecting that the man she had married was up to something nefarious (and out of a need to be with Bond again) Paris went to him after her husband's henchmen tried to kill him. At first he tried to send her away, but they were too strongly drawn to each other. They made love and Bond confessed that he had left her because she had gotten too close. Paris gave Bond the information he needed but Carver, who had been spying on his wife, sent his personal assassin, Dr. Kaufman, to her room hours later to kill her. Kaufman was assigned to make the deaths look like a murder-suicide; Bond killing Paris and then himself but Bond was able to turn the tables on Kaufman and kill him.

Paris' murder ignited in Bond the desire for revenge, shaking his usual professional detachment and clouding his judgment. His eventual partnership with Chinese Intelligence agent Wai Lin brought him back to his senses, however, as well as providing him another lover. When the two were held by Carver at his headquarters in Saigon, Carver reminds Bond of her death and indicates he deems it Bond's fault.

Bond eventually avenged Paris by killing Carver with a powerful sea drill which tore him to shreds. 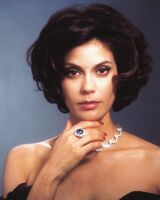 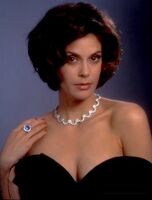 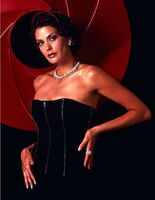 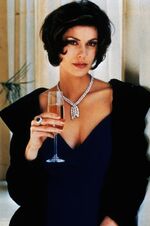 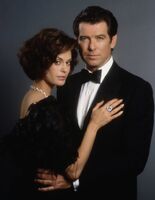 After Paris slaps Bond.
Bond:"Was it something I said?"
Paris:"How about the words, I'll be right back!"