Patrice is a fictional mercenary who appeared in EON Productions' 2012 James Bond film Skyfall. Rapace's likeness would subsequently appear in the video game 007 Legends (2012) and the 2015 film Spectre. The character would also be re-imagined for the 2015 video game James Bond: World of Espionage, portrayed by an unknown actor.

Patrice first appeared in the pre-title sequence of Skyfall, having killed the MI6 Operative Ronson as well as other members of the agency in order to pilfer a list with the identities of all MI6 undercover field agents. M orders James Bond and Eve Moneypenny to follow him. A few moments after Patrice slips from the MI6 safehouse and drives away in his black Audi A5, Bond and Moneypenny begin their pursuit. Upon discovering that he was being tailed, Patrice initiated a high speed car chase that attracted the attention of several local police officers. After crashing his car as a result of the actions of Bond and Moneypenny, Patrice drew a Glock 18, loaded with a 100-round magazine, and murdered several police officials and bystanders to ease his escape. Patrice then took one of the police officer's motorbikes and tries to get away, but was pursued by Bond.

After a chase through a market, Patrice was stopped by Eve, pointing a Walther PPK at him. Through clever movements among the confusing streets, Patrice manages to get on top of a moving train, though Bond managed to keep up, if only just. With Eve chasing after them in the Land Rover, Bond managed to catch up with Patrice and they began a bloody gunfight that saw both of them wounded, with Patrice using his gun and a 33-round magazine. After Bond's gun ran dry and he uses construction equipment being carried by the train to entrap the fleeing fugitive, Patrice manages to shoot Bond in the shoulder, though the agent managed to keep up even after the last of Patrice's bullets were expended in an effort to several the ties that bound his car to Bond's own. Bond managed to catch up with Patrice once again and, out of bullets, they savagely fight with their hands, ducking to avoid a tunnel as Eve attempts to keep up. On orders from an irritated M, Moneypenny fires her rifle to kill Patrice despite her lack of a clear shot. She accidentally hits Bond, who fell to his apparent death in the river. Amused by this turn of events, Patrice glanced with feigner gratitude at Moneypenny before completing his escape. He then took the hard drive to the hideout of his employer, former MI6 agent Raoul Silva, on Hashima Island so that a plan to avenge his abandonment by the agency might be brought into fulfillment.

As a result of his success, Patrice is offered continued work with Silva involving his operations in Shanghai; this would prove to be his downfall. Some months following the apparent death of Bond, and immediately on the heels of a deadly explosion at MI6 headquarters, Bond returns to the service from which he had unceremoniously retired by "enjoying death" and swiftly tracked down Patrice. The bullet that had hit his shoulder proved to be beneficial, as it was a unique type of ammunition used by Patrice, who MI6 had by then identified as being Bond's earlier opponent. Following this lead to Shanghai, Bond pursued his would-be killer through the floors of an office building; Patrice silently and mercilessly killed two security guards to access this building, for the purpose of using its vicinity to a nearby apartment building to assassinate a prominent art critic, wanted dead as part of an unknown contract.

Immediately after this last kill, Patrice was confronted by Bond, who managed to beat his old opponent in a fistfight which culminated with Patrice hanging off the side of the building. Bond demanded the name of his employer, but Patrice did not yield, and instead slipped from Bond's grip and let out a terrified sound as he fell to the pavement dozens of stories below. It was in his rifle case that Bond found his next clue, a gold token for a particular casino in Shanghai. It was through his efforts there that Bond eventually managed to kill Patrice's employer, though not before the data Patrice had procured was partially leaked, resulting in the deaths of several undercover NATO agents.

In Spectre, it’s revealed through Q analysing DNA on the ring of deceased SPECTRE operative Marco Sciarra that Patrice and Silva were both members of the organisation and were used by SPECTRE leader Ernst Stavro Blofeld to wreak psychological pain on Bond.

Patrice is also the main antagonist (and the only one having a name) of the Skyfall mission of the 2012 video game 007 Legends. The game resumes the scenes of Istanbul and Shanghai except that Patrice is helped by henchmen. As in the film, the player pursues Patrice a motorcycle until he jumps on the roof of the train. A small detail is that Patrice tries to knock down Bond when he clings to the train. The fight starts then and Bond is defeated by Moneypenny while Patrice escapes. The player is then confronted with him in Shanghai except that his mission is only to kill him and not to know the name of his employer.

Patrice was a callous and ruthless assassin. He is shown to be intelligent, confident, sly and murderous. Little more is known about his personality, since he is only a minor character. He is proficient with firearms, and he is capable in hand-to-hand combat.

Due to him being a "ghost" his nationality and surname is unknown. He also seems to be mute, as he has no dialogue in the movie, unless counting a scream as he falls to his demise. 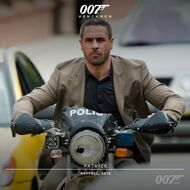