Thunderball (film)
Patricia Fearing is a fictional nurse employed by the Shrublands Health Clinic. Based on the literary character who first appeared in the 1961 Ian Fleming novel Thunderball, she was portrayed by the late Molly Peters in its 1965 film adaptation of the same name.

Fearing is a nurse at the Shrublands heath farm and is tasked with specifically looking after James Bond while he is a guest. While Fearing gives Bond a checkup, Bond seizes and molests her, forcibly kissing Fearing by brutally pulling her lips to his. At one point she sets Bond up with the traction table and leaves him for a few moments. However, during her time away, Bond is attacked by Count Lippe, who turns up the power on the traction table in an attempt to kill him. He is ultimately saved by Fearing when she returns.

After the incident, Patricia and her manager, Dr. Wain, believe that Bond had accidentally bumped a switch causing the traction table to speed up. In the novel, she pleads with Bond to remain silent on Mr. Wain's behalf feeling that it would damage their reputation if the other patients got word of the incident. In the film, Patricia was much colder, rejecting Bond's advances until the incident occurs. At that point she leads him to the clinic's steam room and promptly asks him not to complain about it, as she would be fired by her manager. Bond responds that he would remain silent for a price. Fearing then joins Bond in the steam room, where the two undress and presumably make love. After this, it is implied that they continue having a sexual affair for the duration of Bond's stay, a notion evidenced by the fact that they share a room and sleep together.

There is a later scene in which Bond receives a massage from Fearing using mink gloves. This is changed in the film and has Bond giving a mostly disrobed Fearing a massage with the mink glove, saying that mink "reduces the tension". Fearing responds, "not mine". 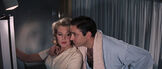