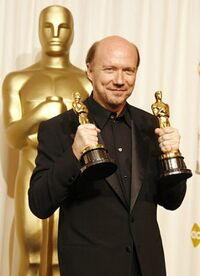 Paul Edward Haggis (born March 10, 1953) is a Canadian screenwriter, producer, and director who was one of several screenwriters for the Bond films Casino Royale and Quantum of Solace.

Haggis spent his early career producing and directing various American and Canadian television network series, the most notable being Walker, Texas Ranger. His career exploded when he was nominated for the Academy Award for "Best Writing, Adapted Screenplay" in 2005 for writing Million Dollar Baby, which was directed by Clint Eastwood. The following year, Haggis won the Academy Awards for "Best Picture" and "Best Writing, Original Screenplay" for his film Crash, which he wrote, directed, and produced. He was nominated for "Best Director" for Crash, but did not win.

Haggis helped pen the adapted screenplay for the 2006 Bond film Casino Royale alongside writers Neal Purvis and Robert Wade. The trio continued their collaboration for the screenplay of the 2008 film Quantum of Solace, the first Bond film to continue a storyline as a sequel to the previous film. Unfortunately, they had only produced a bare-bones script when the 2007–2008 Writers Guild of America strike began. Purvis and Wade completed their draft in April 2007, after which director Marc Forster, producer Michael G. Wilson, and Haggis rewrote it nearly from scratch. Haggis himself completed his rewrite of the script in the two hours before the strike officially began. After that, it became illegal for the production to hire writers, so Forster and even actor Daniel Craig were forced to do rewrites of the script during filming. Needless to say, the screenplay of Quantum of Solace is one of the primary scapegoats for the poor reception of the film.