Piz Gloria was a fictional mountain peak and home to an 'allergy research clinic' and ski resort owned by Comte Balthazar de Bleuchamp. The alpine location first appeared in Ian Fleming’s James Bond novel On Her Majesty’s Secret Service (1963) and was later featured prominently in the 1969 film adaptation of the same name. Piz Gloria also appeared in the 2012 video-game 007 Legends.

Introduced in the 1963 James Bond novel On Her Majesty's Secret Service, Piz Gloria was a mountain peak possibly located in the Languard range, somewhere above Pontresina in the Engadine region. At an altitude of approximately 10,000 feet. The Alp was leased by Ernst Stavro Blofeld (operating under the alias Comte Balthazar de Bleuville). Situated atop the peak were a group of four buildings; a long, low building, a chalet type structure with a vast veranda, a cable-car railhead, and a fourth partially-concealed building. The peak was primarily home to the Institut für physiologische Forschung (English: Institute for Physiological Research). Ostensibly an allergy research clinic, the Institut was actually a laboratory researching methods of biological warfare. In addition to the clinic, Blofeld had constructed a cable railway on mortgage (Bond estimates to have cost in excess of one million sterling), with the assistance of the local district council. Its first year operating, the railway brought in additional funds via the provided ski runs (Irma Bunt claims that the Gloria Abfahrt is already famous) and a bob-sleigh run comparable to the Cresta at St Moritz.

In the film, the location and design of Piz Gloria is different. It is now situated in the Bernese Oberland in front of the Eiger, Monch and Jungfrau mountain range, and it is a rounded, silvery building with a short, conic roof and a squared patio with a helipad.

For the 1969 film adaptation of On Her Majesty's Secret Service, the scenes featuring the 'allergy clinic' were shot atop the now famous revolving restaurant 'Piz Gloria' (named after the fictional peak and clinic). Located atop the Schilthorn near the village of Mürren in the Bernese Oberland, Switzerland, the location was found by production manager Hubert Fröhlich after three weeks of location scouting in France and Switzerland.[1] The restaurant was still under construction, but the producers found the location interesting,[2] and had to finance providing electricity and the aerial lift to make filming there possible.[3] Only accessible by cable car, the cable car station and the restaurant were designed by the Bernese architect Konrad Wolf. The Piz Gloria restaurant claims to be the world's first revolving restaurant, although others already existed, such as the Space Needle in Seattle, Washington.

46 years after its usage in the film, the restaurant opened "Bond World", a room beneath the dining area featuring several bond-themed attractions. 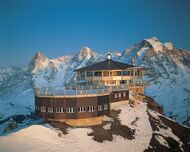