Circa 1971[1], Plenty O'Toole works the casino floor at the Whyte House Hotel, becoming acquainted with seemingly wealthy men hoping to earn a profit for assistance. When her recent target runs out of money, she dismisses his advances and walks away, her attention then being quickly grabbed by Bond, posing as diamond smuggler Peter Franks. Walking over to him, she introduces herself and offers to help.

Working with Bond, O'Toole initially demonstrates her run of bad luck, losing him money. However she is soon impressed when Bond manages to win back his share, plus more. Overjoyed at being given $5,000 for her help, Plenty continues to latch on to Bond insisting they go for drinks. While seated for dinner Bond and Plenty become better acquainted, Bond still pretending to be Franks. When Plenty notices Bond eyeing up a woman playing a harp she is quick to suppose a retreat so she can thank him properly.

Arriving at Bond's hotel room, Plenty is quick to kiss him. After he unzips her dress she goes to the bathroom to prepare herself for the evening when she is suddenly manhandled by three thugs anticipating Bond's return.

"Hey, what the hell is this? A pervert's convention or something?"
― Plenty struggles with the thugs.[src]

The three goons throw Plenty, only clad in her panties, out of the hotel window into a swimming pool down below. Bond remarks at their accuracy saying it was an "exceptional shot". One of the men promptly tells Bond that he didn't even know there was a pool down there.

Later that evening, when Bond has fought off the men and begins seducing Tiffany Case, Plenty returns, soaked, with only a towel to protect her modesty. After finding Bond in bed with Tiffany, Plenty rummages through Case's bag where she finds her home address in Vegas.

The next morning, Plenty visits Tiffany's home—presumably to confront her rival for Bond's attentions, although her precise motivation is never revealed. Unfortunately for her, she encounters Mr. Wint and Mr. Kidd, (who think she is Tiffany Case) promptly murder her by drowning her in the swimming pool, either because they mistake her for Tiffany or because they want to silence an inconvenient witness. The discovery of Plenty's body becomes a major factor in winning Tiffany over to Bond's side.

In the finished film, Plenty's story is somewhat hard to follow as a number of her scenes were cut to shorten the overall running time. The scene where she and Bond get a drink together and she gets annoyed because he is ogling the harpist is missing, as is the scene where she sneaks back into Bond's room and takes Tiffany's address out of her purse, nor is she seen arriving at Tiffany's house and being confronted by Mr. Wint and Mr. Kidd. As such, there is little explanation of how she ends up in Tiffany's pool - this is limited to Bond telling Tiffany that Plenty "must have stumbled" into the pool while looking for her. The filmed deleted scenes are included as extras on some DVD issues of the film and are available on YouTube.

According to director Guy Hamilton, 007 producer Albert R. Broccoli had initially suggested Jill St. John for the part of Plenty O'Toole as a favour to her close friend, lawyer Sidney R. Korshak, who had facilitated aspects of the production in Nevada.[2] Strongly opposed to the suggestion, Hamilton reached a compromise by proposing that St. John take the larger role of Tiffany Case.[2] Lana Wood was subsequently cast in the role following a suggestion of screenwriter Tom Mankiewicz.[3]

Due to the height difference Lana Wood had to stand on a box for most of her scenes with Sean Connery. This proved problematic for the scene where Bond had to strip Plenty out of her dress and down to her underwear because a body double would not have worked for obvious reasons. Ultimately Wood was given extra high heels to wear in that scene.

While filming the scene of finding Plenty O´Toole drowned in Tiffany's swimming pool, Wood actually had her feet loosely tied to a cement block on the bottom. Film crew members held a rope across the pool for her, with which she could lift her face out of the water to breathe between takes. The pool's sloping bottom made the block slip into deeper water with each take. Eventually, she was submerged but was noticed by on-lookers and rescued before drowning for real. Wood, being a certified diver, took some water but remained calm during the ordeal, although she later admitted to a few "very uncomfortable moments and quite some struggling until they pulled me out."[4] 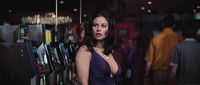 The death of Plenty.