Pola Ivanova was a fictional Soviet intelligence operative working for the KGB. After industrialist and former-operative Max Zorin breaks rank with the KGB, she is one of several agents dispatched to spy on his operations. The character appeared in the 1985 James Bond film, A View to a Kill and was portrayed by British actress Fiona Fullerton.

A Soviet agent from James Bond's past, Pola Ivanova is spying on Max Zorin's oil-pumping station when her colleague, Klotkoff, is caught and executed. Bond realises she's been taping an incriminating conversation between Zorin and his oil company chief, Bob Conley. Emerging from the sea, Bond and Ivanova fight on the beach until that they recognise one another. As she and Bond drive away, Bond fails to recognize that she is being followed by a second car.

Later, Bond meets Pola and seduces her in a hot tub at the Nippon Relaxation Spa, but cannot elicit any information about Zorin from her, as she says they ought not mix business with pleasure. While Bond is drying off in an adjacent room, he calls out to Pola saying he will promise to send her a dozen red roses. Pola shouts back to Bond that it is a sweet gesture, while furtively rifling through Bond's belongings, then absconds to the car that was following her, which is driven by her superior General Gogol. Ivanova proudly hands over the cassette to Gogol, who immediately plays it in his car stereo. Much to Pola's embarrassment, Bond has swapped the tape with a cassette of classical Japanese music which had been playing in the spa.

It is unknown what happens to Pola Ivanova after that. She is possibly fired by Gogol or given some other type of adverse action for her failure.

Bond and Pola recognise each other.

Bond and Pola reminise about their very first meeting.

Pola in the Hot Tub.

Bond and Pola relaxing in the Hot Tub.

Pola turns on the Jacuzzi.

Pola and Gogol realise they have the wrong tape. 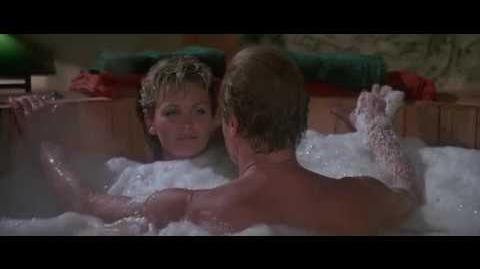