The Pussy Galore's Flying Circus, or simply Flying Circus, is a female aviator team led by Pussy Galore and were in the employ of infamous billionaire, Auric Goldfinger. It is a supporting antagonistic faction in the 1964 James Bond film Goldfinger and the seven pilots are portrayed by Aleta Morrison, Tricia Muller, Maggie Wright, Jane Holland, Jane Murdoch, Maise Farrell, Caron Gardner and Lesley Langley.

Being under the employ of Auric Goldfinger, the Flying Cirus is tasked to spread the Delta 9 nerve gas across the area of Fort Knox that will kill 60,000 people in order for Goldfinger to lead his task force (led by Oddjob and Kisch) to smuggle a nuclear bomb (created by Mr. Ling) into the vault. Such an action would make the gold radioactive and useless for 58 years, and that the value of Goldfinger's gold will increase many times, thus making Goldfinger the richest man in the world.

Upon the arrival of James Bond (as he wis invited to personally witness the preparations of the operation after being captured by Goldfinger), the Flying Cirus pilots are seen landing their planes before greeting Galore, who assures that they will get their assignments tomorrow night. She then dismisses them for the day before transporting Bond to Goldfinger's ranch, where Bond learns of Goldfinger's plot.

Between the shooting at Northolt airstrip on May 13th 1964, and additonal shots completed on July 2nd, 1964, of the five original girls who played the pilots, two had been replaced. The original May line up was with Aleta Morrison, Maggie Wright, Jane Holland, Jane Murdoch and Maise Farrell. By July Jane Murdoch and Maise Farrell had been replaced by Caron Gardner and Lesley Langley. So 7 girls played the 5 pilots, but two of them were eventually only used for photos and never seen in the film. 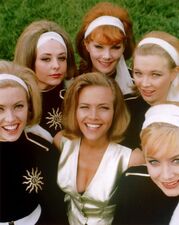 Pussy Galore (Honor Blackman) and her pilots in a promotional still from Goldfinger (1964). 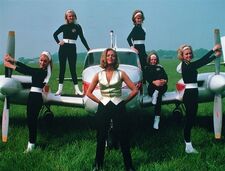 Another promotional still of the Flying Circus from Goldfinger (1964). 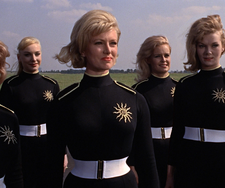 Retrieved from "https://jamesbond.fandom.com/wiki/Pussy_Galore%27s_Flying_Circus?oldid=92128"
Community content is available under CC-BY-SA unless otherwise noted.